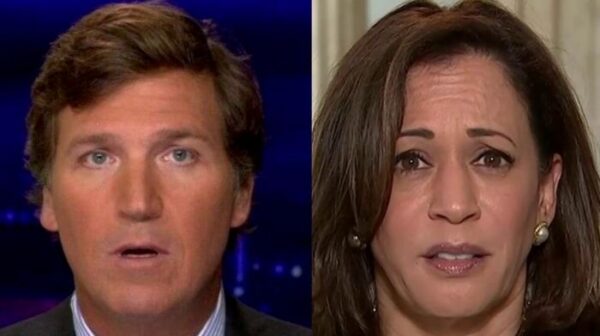 On Tuesday, former Vice President Joe Biden named Senator Kamala Harris (D-CA) as his running mate in the 2020 presidential election. Hours later, Fox News host Tucker Carlson obliterated Harris as a liar who will do and say anything just to obtain power for herself.

“Harris may be the single most transactional human being in America,” Carlson said on his show. “There are time-share salesmen you would trust more than Kamala Harris. You could find payday lenders who are more sincere. So it seemed inconceivable that given his current state, Joe Biden would chose someone so transparently one-dimensional as Kamala Harris. Someone as empty as he is.”

Not stopping there, Carlson looked at the bigger picture by talking about what this choice reveals about where the Democratic Party is at the moment.

“And the choice tells you a lot about the current state of the Democratic Party,” Carlson continued. “America is still technically a democracy, yet neither Biden nor Harris has ever been popular with actual voters. This is Joe Biden’s third run for president. The first two attempts ended in embarrassing disasters. The third was headed at high speed in that direction and then a series of unforeseen flukes and highly crowded primary field left Biden the last man in the race.”

“He was clearly shocked by his own victory,” Carlson added. On election night, the night he clinched the nomination in March, Biden was so rattled he mistook his sister for his wife during the acceptance speech.”

In the end, Carlson knows exactly why Harris is the perfect vice presidential candidate for the modern Democratic Party.

“Just tell Kamala Harris what to say and she will say it,” he said.” That’s the whole point of Kamala Harris. It’s why she’s so useful. And for the next several months, Harris is going to say that Donald Trump is a racist. She will say that every day until November. That’s her job now. You watch.”

“But keep in mind as you watch that there’s no fighting back. It’s not allowed,” Carlson added. “Kamala Harris is a ‘historic’ candidate and that means you have no right to criticize her regardless of what she says. They are already telling you that. They are making it clear.”