Sometimes truth is stranger than fiction. Sometimes fictions presages truth by decades. That’s the case with “Bonfire of the Vanities,” the brilliant conservative novel by author Tom Wolfe. It was published in 1987. It reads like an accurate satire of every staged  racial “protest” movement from George Floyd to this hour.

The novel is overtly about a very rich Wall Street bond salesman, Sherman McCoy, who runs over a black kid in the Bronx after getting lost. His mistress is at the wheel but he gets blamed. The story follows him through his life, work, the incident, and the fallout that destroys his elite existence.

But the secondary plot line is everything we see today, and sadly much of what now again bedevils New York City. It is set in 1987, seven years before the Giuliani renaissance began. Rampant crime, leftwing obsessions, an out-of-touch elite, police sold out by their superiors in City Hall and the district attorney’s office, and a news media hoping for violent riots to boost ratings and confirm their leftist racial narrative are all in the novel’s mix. 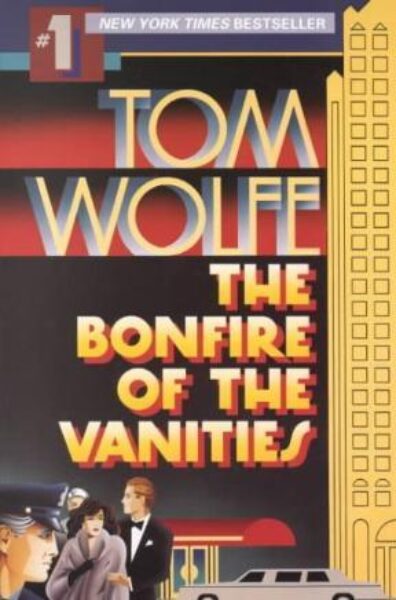 And that’s the part Wolfe really gets right: the riots. He writes them as staged-for-television events anchored by blow-dried airheads and prefabricated at a moment’s notice to get media coverage. He also nails the cynical manipulation of race by the hard-left to advance their political goals. For them it’s really never about race one way or another, only about raw power.

This was five years before the Rodney King riots, so America had not yet slipped into violent riot mode. Wolfe’s riots are violent in a minor key, though the Left is portrayed as violent in other circumstances. In fact, the prologue, featuring an Ed Koch-like mayor of New York, is almost a play by play reenactment of what happened to Senator Rand Paul after Thursday night’s Republican National Convention. Only it was written over thirty years prior to the event.

Wolfe also wrote, years before “Bonfire,” the funniest conservative book ever written. Though some of P.J. O’Rourke’s works are stiff competition, Wolfe’s “Radical Chic and Mau-Mauing the Flak Catchers” is a sardonic look at limousine liberals and the second part, Mau-Mauing, is a pitch-perfect portrayal of white guilt in government and the welfare state. Though set in the mid to late 1960s, both scenes could have been set in 2020. Here’s an excerpt that chronicles a Manhattan liberal celebrity party for the Black Panthers. Today it would be Black Lives Matter.

“Mmmmmmmmmmmmmmmm. These are nice. Little Roquefort cheese morsels rolled in crushed nuts. Very tasty. Very subtle. It’s the way the dry sackiness of the nuts tiptoes up against the dour savor of the cheese that is so nice, so subtle. Wonder what the Black Panthers eat here on the hors d’oeuvre trail? Do the Panthers like little Roquefort cheese morsels rolled in crushed nuts this way, and asparagus tips in mayonnaise dabs, and meatballs petites au Coq Hardi, all of which are at this very moment being offered to them on gadrooned silver platters by maids in black uniforms with hand-ironed white aprons…” Thus, at the end of your summer reading list, try Wolfe. Either work will do. “Radical Chic and Mau-Mauing the Flak Catchers” is much shorter than “Bonfire.” They entertain and enlighten, as any good writing should.