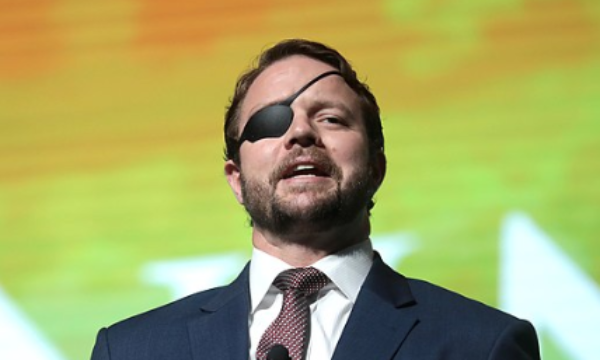 Rep. Dan Crenshaw (R-TX) has hit the nail on the head when it comes down to the choice facing Americans this November. He made that decision very clear recently in an interview with Fox News, articulating, “You’re seeing a very clear choice in 2020: it’s chaos versus safety and security, it’s socialism [which is] doubling your tax rates versus economic freedom, it’s a government takeover of health care versus keeping the doctor that you trust, it’s acquiescence to China versus holding China accountable.” He’s also not sparing Joe Biden and the Democrats the lash of his social media whip on immigration.

This is the “moderate” Democrat party everyone. https://t.co/ZjLRQPiRE3 [1]

Congressman Crenshaw gave examples of states like Texas, where freedom still rings, and California, where it is limited: “Vote for places that work. Texas understands that limited government, more freedom, not less, doing things that work — that don’t just feel good but actually work is a good recipe… There are certain economic foundations, political foundations, and cultural foundations that make society more prosperous and free and states like California that are always pushing towards some socialist utopia, they tend not to work because they are really not taking care of their citizens. They’re always talking about equality and justice and, yet, they have less of it, so they are fleeing to places like Texas.”

It’s talk like that, and his combat record, that has him on a short list for the 2024 ticket. But we have to get through this year first.

The alternative, as Crenshaw points out, is chaos and anarchy. But what do we see, courtesy of the Democrats and their allies, almost every night in numerous American cities? Chaos and anarchy brought to you by the not so merry looters and pyromaniacs of Antifa and Black Lives Matter.

President Trump is doing the best he can to combat this menace. But he has the active opposition of the press, Democrats, and left-wing city councils, mayors, and governors across the nation.

The only way our cities are not going to continue to burn (and this is still no ironclad guarantee) is if the president is reelected and his mandate is clear enough to scare into line the Democrats and their state and local acolytes. But the Democrats have already promised more civil unrest no matter if Trump wins by 100 votes or 10 million votes.

Nevertheless, safety and security is the biggest arrow in the president’s campaign quiver. He must emphasize that time and time again with images from Portland and Seattle. He must remember the little girl killed by Black Lives Matter in Atlanta. He must honor the memories of all law enforcement personnel who have died in the riots and ensure they did not die in vain. Most of all, he must take the battle to the opposition and rhetorically pummel them until they cannot stand and then kick them where they lay. Nothing short of it will Make America Safe and Secure Again.