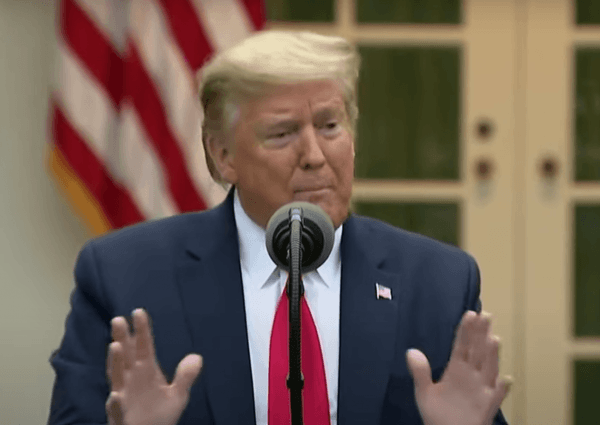 After discussing it for some time now, President Donald Trump said, while aboard Air Force One, that he planned to ban the outrageously popular app TikTok.

The platform has seen a rapid increase in engagement, with over 800 million users, but there has been growing concern within the administration over its foreign ownership, influence and access to U.S.-based user data.

TikTok, like Zoom and several other popular apps, is owned by U.S. adversary China.  Specifically, the short video app is owned by Beijing-based ByteDance Ltd., one of China’s most influential tech companies.

This comes amid increasing tension between Washington and Beijing.  Just days ago, a Chinese consulate was closed in Houston, Texas went into emergency destruction mode, burning sensitive information before moving out of the facility.

While speaking to reporters last night he said “as far as TikTok is concerned, we’re banning them from the United States.”

When queried on how soon things could happen, he responded that he will sign the document tomorrow (Saturday) and that he believed the order would go into effect immediately.

The discussion regarding the app has been ongoing with government officials for several weeks now.  Secretary of State Mike Pompeo referenced a possible ban in early July due to national security concerns.  The app was previously banned on U.S. government installations over concerns that China was using the app to spy on Americans.

“Whether it was the problems of having Huawei technology in your infrastructure we’ve gone all over the world and we’re making real progress getting that out. We declared ZTE a danger to American national security.”

Pompeo continued, “with respect to Chinese apps on peoples’ cellphones, the United States will get this one right too.”

While much precedent doesn’t exist in terms of executing a ban on technology such as TikTok, given the potential threat to national security the Trump administration is willing to create regulations and policy to pave the way to a more secure future, while also a roadmap for such future issues.

Furthermore, the president believes he has the authority to do so under the International Emergency Economic Powers act.  “Well, I have that authority. I can do it with an executive order or that,” he said, referencing the IEEPA.

At the time of publication of this article, the executive order had not been signed, but we are certain TikTok executives based in the U.S. and its rabid base of followers will push back against such a move, should if officially occur.

Questions of whether the company could be purchased by a U.S. ownership group and how that would alter concerns about national security remain to be seen, but has been floated.  Microsoft had also been rumored to be interested in acquiring the app.

This piece was written by Drew Berquist on August 1, 2020. It originally appeared in DrewBerquist.com [1] and is used by permission.

Read more at DrewBerquist.com:
Angry Shopper Assaults Woman With Cane, Throws Her To Ground For Not Wearing Mask Properly [2]
Crazy Elderly Woman Tells Mother and Her Children “I Hope You All Die” For Not Wearing Masks in Walmart [3]
Portland Rioter Arrested for Arson After Surveillance Footage Shows Him Shirtless With His Last Name Tattooed Across His Back [4]