Minneapolis Police chief to public: Hand over your stuff to robbers

How many times can I say, “I never thought I’d ever see this…” regarding law enforcement today. Okay, we’ve long known the Left was into transferring wealth from the productive to the non-productive. That is no surprise, but they usually do it with legislation. Now, they’re apparently adding using crime as a mechanism for transferring wealth from victims to criminals.

Along with defunding/abolishing the Minneapolis Police Department (MPD) comes the expected rise in crime—well, expected by anyone with half a brain, which eliminates the Minneapolis City Council (MCC) and Mayor (barely there) Jacob Frey. Now, I’m no math whiz (ask anybody) but even I can solve the problem of what happens when you have fewer cops. You get more crime.

So, how to best handle more crime and fewer cops? Just have the victims hand over their stuff to criminals. At least, that’s what the Minneapolis Police Department recently told the public. As bad as that sounds, let me first say—this is not the MPD’s fault. A police department operates under the orders of a mayor and a city council which are carried out by a police chief. And that’s what’s happening. The police department is warning people of a new reality brought to them by their radical elected officials.

There has been a 36-percent increase in robberies and 46-percent more carjackings compared to last year. And with the arrest policies, use-of-force restrictions, and the budget cuts levied by the MCC, the MPD has to be realistic about its intentionally compromised mission to provide public safety to the city’s taxpayers.

According to Bryan Preston at PJ Media, “The Minneapolis Police Department (MPD) told residents they should ‘be prepared’ to hand over their phones, wallets, and purses to robbers.” In the city’s Third Precinct (recently sacked by violent socialists and anarchists), in just one month, there were over 100 reported robberies and 20 carjackings. 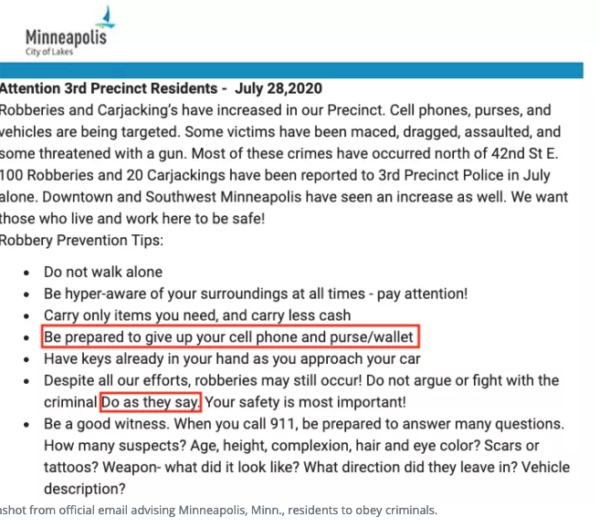 Preston writes about a victim of a car theft: she said her boyfriend had been using her car to deliver food. He’d stepped out to hand the customer the food, and a thief jumped in the driver’s seat and took off. Preston wrote, “They’re lucky he wasn’t shot or stabbed. He merely lost his means of making a living during the worst economy in nearly a century.”

But don’t worry. I’ve heard it repeatedly from leftists like those on the MCC and Mayor Barely There: It’s only property. It can be easily replaced. Really? He’s delivering food to make ends meet. What are the odds they had theft insurance on the car?

Since surrendering to the Marxist revolutionaries, Minneapolis’ leftists have continued to decimate the city’s police protection. Preston translates the police department’s advisement to its citizens: “You may as well let the criminals have what they want in the hope they decide not to kill you, anyway. Basically, you’re on your own.” He then notes Seattle’s police chief, Carmen Best, sent her city residents a similar note, which I recently wrote about.

And with a slew of Democrat district attorneys refusing to acknowledge self-defense rights and laws, Preston also notes, “Defend yourself from a criminal, and odds are a Democrat prosecutor will ruin your life for it.” He’s right.

You need only look at what happened to the McCloskeys in St. Louis to see an example of an out-of-control tyrant prosecutor in Kim Gardner. She not only made up the charges against the couple and failed to charge those who committed crimes against them, but also it seems Gardner may have put her thumb on the scales of justice by tampering with the evidence.

The Left is fond of flicking away public concerns about all the changes they’ve been inflicting on society by saying Americans have to get used to a “new normal.” No, there’s nothing “normal” about decimating a police department (especially when crime is increasing) to the point it is unable to fulfill its public safety mission. In fact, rather than a “new normal,” the Left is infecting America with a new abnormal.

Steve Pomper is a retired Seattle police officer. He's served as a field training officer and on the East Precinct Community Police Team. He's the author of four books, including "De-Policing America: A Street Cop's View of the Anti-Police State." He's also a contributor to the National Police Association.