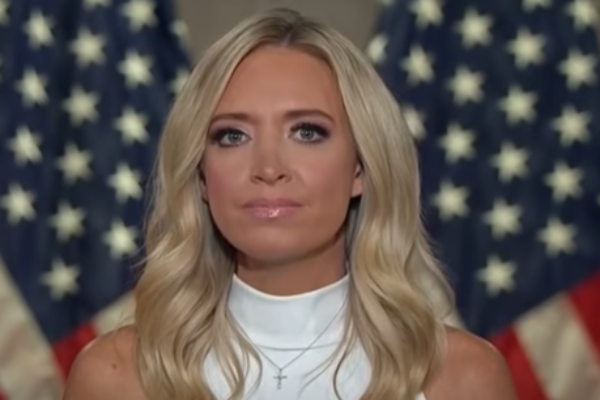 On Wednesday, White House Press Secretary Kayleigh McEnany expressed how she felt about President Donald Trump as she spoke at the Republican National Convention.

McEnany explained what it was like being a mother of her nine-month-old daughter while also working for the president and what both meant to her.

“I want my daughter to grow up in President Donald J. Trump’s America,” she said.

“I choose to work for this president for her,” McEnany said. “When I look into my baby’s eyes, I see a new life, a miracle for which I have a solemn responsibility to protect.”

McEnany talked about the importance of God in her life, protecting unborn children, keeping neighborhoods safe, and stressed that President Trump would keep fighting for all Americans.

WH @PressSec [3] Kayleigh McEnany delivered a deeply personal speech. She says eight women in her family were diagnosed with cancer. She said she followed in her mother's footsteps deciding to have a double mastectomy. She said Pres Trump and Ivanka Trump called her after surgery.

McEnany also talked about Trump calling her personally to check in on her after a double mastectomy surgery she had, saying she was “blown away” that he went out of his way to do that.

“I can tell you that this president loves the American people, stands by Americans with preexisting conditions, and supports working moms,” she said.

"As I recovered, my phone rang again," @kayleighmcenany [5] said.

"It was President Trump"

McEnany added that since becoming press secretary, she’s personally witnessed Donald Trump’s deep love for the American people, whether that meant calling parents who lost their children in criminal acts, writing to fallen soldiers’ families or sticking up for unemployed Americans.

“The same way President Trump has supported me, he supports you,” McEnany said. “I see it every day.”

McEnany has been a rock-star spokesperson for the Trump administration, taking on the Left-leaning press in no uncertain terms. Her constant defenses of her boss come across as heartfelt, and that admiration for the president was on full display during her convention speech Wednesday night.