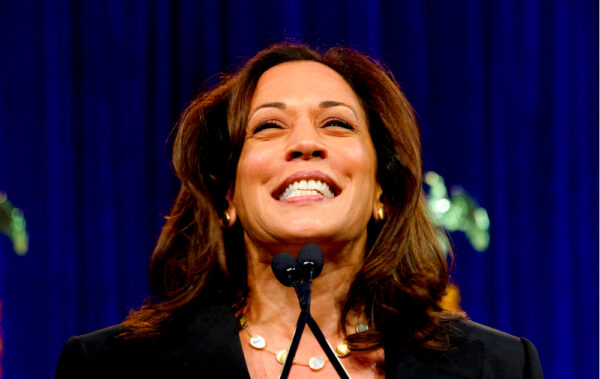 Kamala Harris’s father is not a big fan of his daughter’s identity politics.

As a matter of fact, he’s such a critic of her pandering and race baiting that he called her out back in 2019 during her failed Democrat primary bid.

It all started during an appearance on “The Breakfast Club,” a popular New York-based radio show.

Harris laughed and giggled endlessly about smoking pot—keep in mind this is the woman who, as a prosecutor in California, incarcerated slews of people on marijuana charges.

Kamala then used her family’s “Jamaican roots” as another reason for why she loves to smoke pot so much— reinforcing that “Rastafarian” stereotype.

Her father, who is a prestigious professor, did not like that one bit.

Yes, she smoked pot, she said. Coyly. And she made a point of saying she inhaled.

A long time ago.

She said pot brings people joy. And she remembered how it felt to get high.

She also jokingly referred to her roots. “Half my family’s from Jamaica; are you kidding me?”

Kamala Harris talks legalizing marijuana: “Half my family is from Jamaica, are you kidding me?” pic.twitter.com/bSn1PhgRlZ [2]

Kamala’s father was so incensed by what his daughter said that he wrote a statement disavowing his daughter’s identity politic and even called it a “travesty.”

Here’s what he said:

“My dear departed grandmothers (whose extraordinary legacy I described in a recent essay on this website), as well as my deceased parents, must be turning in their grave right now to see their family’s name, reputation and proud Jamaican identity being connected, in any way, jokingly or not with the fraudulent stereotype of a pot-smoking joy seeker and in the pursuit of identity politics. Speaking for myself and my immediate Jamaican family, we wish to categorically dissociate ourselves from this travesty.”

How bad of a politician do you have to be to have your father come out and disavow you?

Kamala Harris is a phony. She’s a typical “anyway the wind blows” politician who will say whatever she needs to say in order to score some political points and she doesn’t care if she embarrasses her own family with insulting stereotypes in the process.