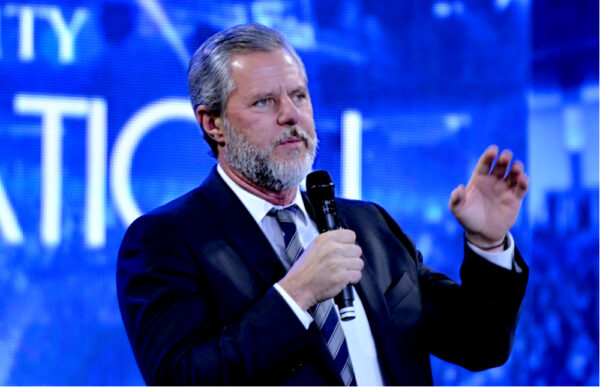 In the annals of religious scandal this is a minor affair. No infidelity is charged, no financial impropriety, no theological dispute. This is a case of very bad public relations and a country accustomed to jumping to conclusions on some while excusing much worse from others. That being said, Jerry Falwell, Jr. should have known his audience and his public reputation would not stand for this. What was he thinking then? God only knows.

What we do know is that Liberty University in Virginia said Monday that its board of trustees had chosen Jerry Prevo as the acting president of the university after now-former President Jerry Falwell, Jr. was placed on indefinite leave after this photo hit social media. “Indefinite leave” is merely a kind way to get the boot. It saves a shred of dignity.

Dr. Prevo is a former pastor at a Baptist church in Alaska. He has been chairman of the school’s board of trustees since 2003: “I want to thank my fellow board members for having confidence that I could be entrusted with the responsibility of serving as the Acting President during this time of Jerry Falwell, Jr’s indefinite leave of absence. Please pray for us as well as the Falwell family as we embark on our academic year and so we may continue to be united in our common purpose and our faith in Christ.”

Conservative GOP Congressman Mark Walker (R-NC) commented on the situation: “Jerry Falwell Jr’s ongoing behavior is appalling. As a Music Faculty Advisory Board Member and former instructor @LibertyU, I’m convinced Falwell should step down. None of us are perfect, but students, faculty, alumni and @LUPraise deserve better.”

As a Music Faculty Advisory Board Member and former instructor @LibertyU [4], I’m convinced Falwell should step down.

None of us are perfect, but students, faculty, alumni and @LUPraise [5] deserve better.

Falwell himself assures supporters that the picture with his pants unzipped, with his arm around a comely brunette, is completely innocent. Even if so, how could he not understand the potential public relations fallout?

“I’ve apologized to everybody,” Falwell said in an interview last week. He insisted the woman in the revealing pic was his “wife’s assistant….She’s pregnant, so she couldn’t get her pants up,” he said in perhaps the worst explanation in the history of explanations. “And I had on a pair of jeans that I hadn’t worn in a long time so I couldn’t get mine zipped either. And so I just put my belly out like hers…She’s my wife’s assistant and she’s a sweetheart, and I should never have put it up and embarrassed her.” Yeah, Sherlock. Brilliant deduction…now that it’s too late.

Americans for decades have been titillated and appalled by the extracurricular hijinks of evangelical religious leaders, not to mention the horrific activities of some Roman Catholic priests. On the Protestant side of the aisle, names like Jim Bakker and Jimmy Swaggart are synonymous with sexual escapades that brought down thriving ministries. Falwell Jr. is old enough to remember that. In that context, even if, as it seems, his wife was present and thus it is very unlikely that anything untoward happened, he must have had a public relations death wish to do something so boneheaded. At any rate, he’ll now have some time to reflect on it.