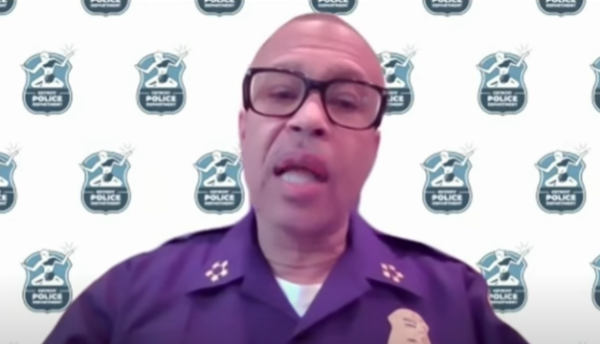 There are a lot of liberal cities that have turned into literal hell-holes of violence and chaos thanks to violent Democrat mobs and local Democrat officials who allow it to go on.

But there is one liberal-run city that hasn’t, and it’s Detroit, Michigan. The reason Detroit hasn’t descended into absolute chaos and living hell is that their chief of police, James Craig, is strong guy with common sense who will never bend to the mob. He won’t tolerate mob violence in his city and, most important, he backs his cops and treats bad guys like the enemy.

As a side note, he also frequently stands up to that race-baiting big-mouth shrew Rashida Tlaib—which we especially love!

Chief Craig explains why Detroit hasn’t turned into a chaotic sh*thole. It’s simple, really: Craig says the reason why the mob hasn’t taken over Detroit, is because “we don’t retreat here.”

As major cities across the United States have succumbed to violence from liberal mobs and given in to demands to cut police funding in the months following the death of George Floyd, one major American city has not experienced the same level of mob violence.

Like other major cities, Detroit votes overwhelmingly Democratic in presidential elections and has been controlled by Democrats for decades. However, unlike the cities that have experienced destructive riots at the hands of Black Lives Matter and Antifa supporters, the Motor City has a leadership that is willing to put its feet down.

Host Tucker Carlson began the Tuesday segment by pointing to Detroit as “one unlikely success story” that has emerged in the time of national unrest.

“Rioters there have not looted or destroyed a single business in the city of Detroit,” he added.

When Carlson asked why the city has not experienced the kind of riots that have struck elsewhere, Craig gave a simple, straightforward answer: “We don’t retreat here in Detroit. We’re just not going to do it.”

In addition to praising his police department, Craig complimented the citizens of Detroit for their refusal to put up with a group of “misguided radicals who have tried to incite violence in our city.”

“When you talk about what’s different here, we have a city that has stood together,” he said.

While other cities’ disastrous handling of the riots and pushes to defund the police have sucked up most of the media oxygen, Detroit is not the only one bucking the national trend.

Chief Craig has appeared on Tucker Carlson’s Fox News show several times. And each time he lays out his philosophy: Anger is okay, but violence and destruction are not.

This is an interview from the end of May, but Craig’s message always remains the same.

This is what happens when the radical commies or weak soy-boy liberals are not running your police or your city.

I don’t know what this police chief’s politics are, and I really don’t care.

In liberal-run cities these days, it’d be easier to spot Big Foot than find officials who use common sense to run their cities and work tirelessly to keep law-abiding citizens safe.