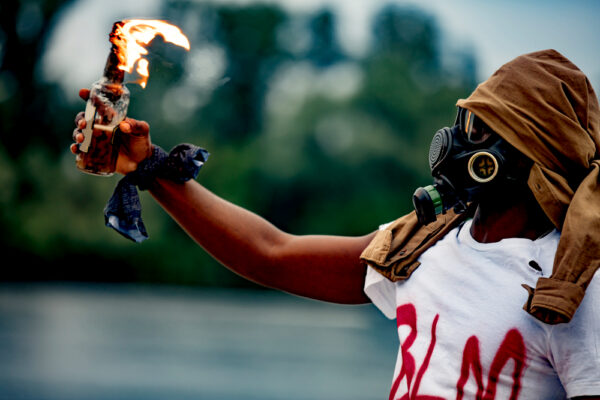 The violent racist group Black Lives Matter has graduated to a public display of their formerly covert practices. Thus the Louisville Courier-Journal reported on Sunday that business owners in Louisville received letters from BLM thugs. The letters contained a list of demands that the owners had to capitulate to, or else. The paper referenced a press release delivered by BLM terrorists who told one owner to put it on his front door so “your business is not f***ed with.” Extortion pure and simple. Because if you don’t kneel to BLM and thus refuse to put it on your door, then, the letter implies, you will be “f***ed with.”

But one Cuban businessman is standing up to BLM. Fernando Martinez, who is a partner in the Ole Restaurant Group and came to the U.S. on a raft from Castro’s Cuba when he was 18, said this to BLM: “There comes a time in life that you have to make a stand and you have to really prove your convictions and what you believe in. All good people need to denounce this. How can you justified (sic) injustice with more injustice?” No letter went on his front door.

At La Bodeguita De Mima on E. Market St, where members of Louisville’s Cuban community are gathering to show support for owner Fernando Martinez. He said he was threatened by BLM protesters, who sent letters to business owners in NuLu demanding to improve diversity in the area. pic.twitter.com/sFJR5c0KNM [1]

Incidentally, BLM’s idea of “improving diversity” likely ends up with diverse denominations of cash in their pockets.

Martinez further said, “How can I be called a bigot and a racist when my family is black? When my son is gay? I’m the proud father of a gay son, and I’m gonna fight for him against anybody.”

Okay then. Martinez is a bit confused on his subject matter, but he seems to get the gist. What did a top Louisville race hustler say about Mr. Martinez’s fervent plea for tolerance?

Sadiqa Reynolds, the president and CEO of the Louisville Urban League, said she will no longer patronize the restaurant and wonders why “any human, other than a racist, would choose this time to tell us how little our lives matter.”

Curious minds wish to know: Just when did Martinez say that? How do you take his passionate plea for black and gay rights and turn it into a Bobby Byrd Kluxer diatribe? She just followed the first rule of public relations management when you’re in a pickle: Change the subject and attack the messenger.

Though it does bring up the sensitive topic of black/Hispanic relations. It is no secret in the Latin community that many Latins are not exactly enlightened on civil rights when it comes to blacks. I say this as someone of both Latin and black heritage. It emanates from the slave trade in Latin America and thus blacks being perceived at the bottom of the socioeconomic order. Many Latins, being status crazed, still hold on to that anachronistic and unfortunate perception.

That does not obscure the fact that Martinez is a brave man to stand up to the violent thugs and extortionists of BLM. Cowardly guttersnipes like BLM thrive on the threat of force when applied to the weak. Martinez called their bluff. Hopefully others, including in the black community, will follow his lead.