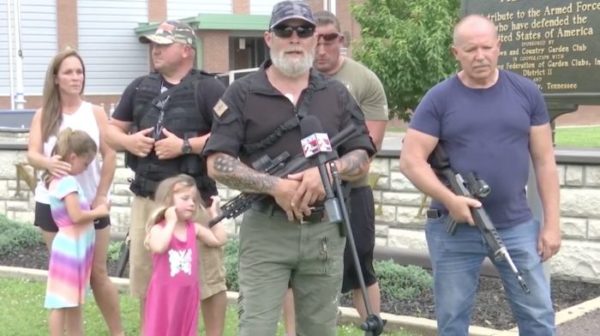 Over the past few weeks, violent rioters have been toppling statues and desecrating memorials that they deem to be “offensive.” That’s why one group of veterans decided to step up and arm themselves to protect the Wilson County Veterans Memorial in Lebanon, Tennessee, just in case any protesters get the idea of messing with it.

Keith Sikora is a veteran who began his watch over the memorial a week ago, and he made it clear that he will do whatever it takes to protect it. “A show of force can be a very powerful deterrent. We’re not here to fight, unless we have to,” Sikora told WKRN-TV [1]. His fellow veteran Joe Hester added, “I’m not here to promote violence, I’m not here against any race whatsoever. I’m for all good people and all good things in this country and preserving them.”

Sikora and Hester are each veterans of the United States Marine Corps, and the memorial is very special to both of them. “It’s a big target because who else gave more for this country than the ones who gave their life, and if you’re on the other side and you hate this country, the way they’re portraying the way they hate it, this is the best target to hit,” Sikora said.

“What I’ve seen across the nation in certain cities, these violent thugs all in the name of being against racism, attacking innocent people, burning down cities, destroying communities and intimidating innocent people, has angered me so much that I’m tired of sitting back and talking about it,” Hester continued.

In the week that Sikora has been doing this, other veterans like Hester have joined him. “I went and served this country for the country and everybody in it. My Marines and I, we’re not black, were not white, Mexican, or Chinese. We all call each other green, different tone of green, but we’re all green. That’s how we were trained, that’s how we think, that’s the way we are now,” Sikora explained. “We don’t stand against any particular race, we stand for them, all of them, unified, and equally. We stand behind the Constitution that all men are created equal, and we will fight and die for that.”

By last Saturday, a dozen people were protecting the memorial, and more are expected to join in the coming days. “These people aren’t coming here with just words,” Sikora said.” They are people who are trying to tear down this country, that’s what I stand against.” The veterans added that they will remain at the memorial to their brothers and sisters until they know it is safe.