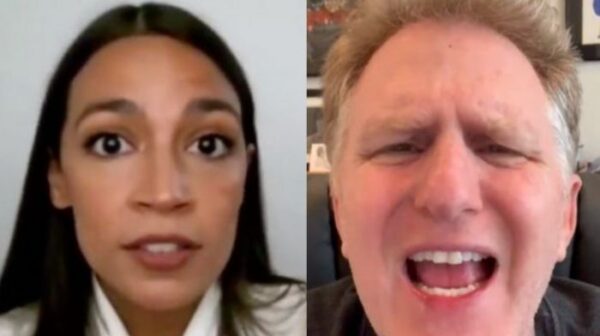 Michael Rapaport is an actor who is typically known for his profanity-laced, below-the-belt attacks on Republicans, with First Lady Melania Trump [1] being a favorite target of his. That’s why it came as a huge surprise this week when Rapaport broke with Democrats and set his sites on the radically-left darling Rep. Alexandria Ocasio-Cortez (D-NY).

Rapaport was enraged when he saw that Ocasio-Cortez responded to the recent massive crime spike in New York City by nonsensically blaming it on people just wanting to “shoplift some bread.”

“Maybe this has to do with the fact that people aren’t paying their rent and are scared to pay their rent and so they go out and they need to feed their child and they don’t have money,” she said. “They feel like they either need to shoplift some bread or go hungry.”

AOC on increased NYC crime: "Maybe this has to do with the fact that people aren't paying their rent & are scared to pay their rent & so they go out & they need to feed their child & they don't have money so… they feel like they either need to shoplift some bread or go hungry." pic.twitter.com/oHSTWWJZ6a [2]

This outrageous comment from Ocasio-Cortez may have been enough to cause Rapaport to finally see the light about what the Democratic Party has become, as he took to Twitter to fire back at her.

“AOC talking about people stealing Bread. Do something @AOC stop playing games,” Rapaport tweeted. He wrote this alongside a link to an article about a one-year-old boy who was shot dead during a barbecue in a New York City park over the weekend.

Not stopping there, Rapaport doubled down by responding to people who like Ocasio-Cortez because she is feisty and charismatic.

Y’all don’t wanna push @AOC [4] to be great? Y’all think she’s perfect?
Fuck like able. Fuck charismatic.
I want HONEST REALITY. I don’t give a shit about all that cute shit.
She knows exactly what the fuck it is and it ain’t about Bread being stolen.
I don’t PICK sides with them pic.twitter.com/y3njsC7LjO [7]

New York City has descended into chaos since the city council surrendered to the radical Left by cutting the NYPD’s budget by $1 billion. During the first six months of 2020, there has been a 46 percent surge in shootings [9] compared to the same time period last year.

No wonder a leftist like Rapaport is finally becoming disillusioned with Ocasio-Cortez and the radical Left. If Democrats don’t change their ways soon, they can expect a whole lot more people in their party to jump ship in the coming weeks.