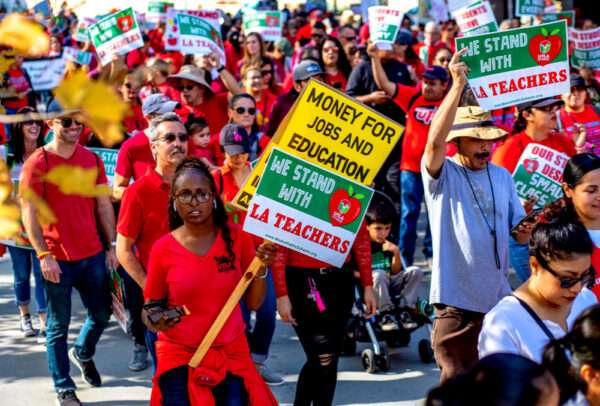 It’s no surprise that California is very liberal. In the state, Los Angeles leads in that kind of lunacy and teachers unions lead the twisted way in the city. So it was of no surprise late last week when the Los Angeles teachers union came out with a call for more money for themselves by picking over the budgetary carcass of the police department. Los Angeles Mayor Eric Garcetti recently dropped police funding by $150 million.

A teacher’s union in Los Angeles said schools there won’t re-open unless the police are defunded.

Why are our children being held hostage to those wanting to make a political statement? 🤔

“Police violence is a leading cause of death and trauma for black people, and is a serious public health and moral issue,” a teachers union paper said. “We must shift the astronomical amount of money devoted to policing, to education and other essential needs such as housing and public health.”

The Los Angeles Unified School District and the teachers union said that teachers want to get back into their classrooms, but asked, “given broader societal conditions, how do we open physical schools in a way that ensures that the benefits outweigh the risks, especially for our most vulnerable students and school communities?”

That’s a dodge. They are very happy collecting their exorbitant pay while working from home in their pajamas. They’ll do and say anything to keep it that way.

The teachers union paper pointed out that minority “working communities, where people are more likely to have ‘essential’ jobs” oftentimes have insufficient healthcare and face other risk factors while “the rewards of economic recovery accrue largely to white and well-off communities that have largely been shielded from the worst of the pandemic’s effects.”

Oh yes, the virus itself is racist and seeks out minorities to infect as it crows with maniacal virus laughter. This is such hogwash it is amazing they can put it out with a straight face.

Cecily Myart-Cruz, the union president, said, “We all want to physically open schools and be back with our students, but lives hang in the balance. Safety has to be the priority. We need to get this right for our communities.” She’s lying. Funding hangs in the balance and they want more of it.

“It is time to take a stand against Trump’s dangerous, anti-science agenda that puts the lives of our members, our students, and our families at risk,” Myart-Cruz said…on her way to the bank. Coincidently, local media ABC 7 reports that 83 percent of Los Angeles teachers union members said schools should not physically reopen on Aug. 18. What about the effects on students? The teachers union doesn’t care one whit. They’d rather have a cheap Chardonnay for lunch.

Secretary of Education Betsy DeVos hit back hard. “Parents are expecting that this fall their kids are going to have a full-time experience with their learning, and we need to follow through on that promise,” DeVos told the press on Sunday, stressing that “kids cannot afford to not continue learning.”