This revelation doesn't fit the left's narrative or agenda, so this story will simply "disappear."

This past weekend a white Jaguar plowed into a group of Black Lives Matter protesters who were congregated on the freeway, wearing all black.

Much has been unclear about the event up until now, but police are telling us that he driver of the Jaguar ran through a police barricade and drove into a group of BLM protesters at a very high rate of speed.

Two women were rushed to the hospital with very serious injuries.

MORE NEWS: Media Turning On President They Put Into Office

The left wasted no time trying to politicize the story, blaming President Trump and all “white people” etc. etc.

But they were stopped in their tracks when it was revealed that the driver of the car is a young black man.

Sadly, we just found out today that one of the women that were hit has just died.

Summer Taylor, a non binary Black Lives Matter activist who was hit by a car while protesting on the I-5 freeway in Seattle, has died. Dawit Kelete, who is black, is accused of being the driver & was arrested. pic.twitter.com/Lr6Jp3BkzO

Now, the left has a problem…this outcome doesn’t fit the “Nazi Trump Supporter” narrative they were spouting when they thought only a white man would be driving a pricey Jaguar.

Liberals are deleting their tweets quickly, but they all looked something like this: 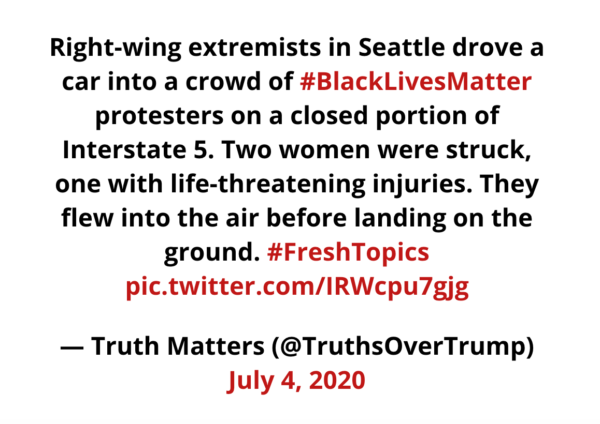 Ironically, the account who spread this fake news goes by the handle “Truth Matters.” How’s that for irony?

Here’s some information on the driver who hit the protesters.

An Instagram page credited to a person named Dawit Kelete showed multiple photos of a Black man having fun in various settings that resembled college life at Washington State University. The man in those Instagram photos appeared to be the same person in the photos circulating on social media.

A LinkedIn page credited to a person named Dawit Kelete identified him as a sales manager as well as an operations manager for DoorDash in Seattle. His education was listed as Washington State University.

The apparent hit and run early Saturday morning came as Seattle was dealing with the fallout from other protests in the city, including the are where the Capitol Hill Organized Protest (CHOP) has been taking place. The Seattle Police Department has been arresting and removing anti-law enforcement protesters from the CHOP zone, a location with no cops where a Black teenager was killed and another was injured.

We’re told that when the driver was taken into custody, he was somber, and kept asking how the victims were.

It doesn’t sound like this was some anti-BLM road rage, but we’ll have to see what other information is uncovered.

MORE NEWS: WATCH: Pelosi Blasts Those Standing In The Way Of Voter Reform, Suggests MLK And Lincoln Are Crying

This piece was written by Missy Crane on July 5, 2020. It originally appeared in WayneDupree.com and is used by permission.

Media Turning On President They Put Into Office

Ben Carson Believes In The American Promise Of Equal Opportunity

WATCH: Pelosi Blasts Those Standing In The Way Of Voter Reform, Suggests MLK And Lincoln Are Crying

Kamala’s Interview Was Really Bad, But A Body Language Expert Reveals It Was Even Worse [VIDEO]

Biden Gets Wrecked In 11 Seconds On CNN Of All Places, His 2022 Is Off To That Bad Of A Start [VIDEO]