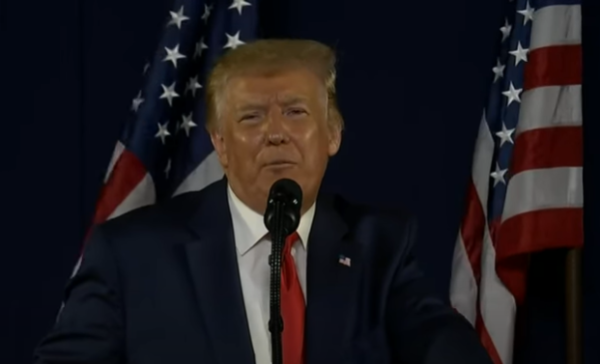 During a rousing speech, one of the best of his presidency, in front of Mount Rushmore on Friday the president proposed an American pantheon, a “National Garden of American Heroes [1].”

The stage could not have been set any better. The president and his wife looked top notch, GOP Governor Kristi Noem was articulate and gorgeous —making her smart money for the 2024 Republican ticket— the Blue Angels fly by was inspirational, and the flags waving in the wind to the back of the president as he was speaking finished off the near perfect picture.

During his speech at the foot of Mount Rushmore on the eve of Independence Day, Donald Trump announced he was signing an executive order to establish the National Garden of American Heroes, which will feature the “greatest Americans to ever live.” https://t.co/a899xWAh4l [2]

While he gave a full-throated defense of democracy, free speech, and American heritage, the big reveal was the upcoming garden. While an excellent idea, the culture war fights over inclusion in that space promise to be tremendous.

But on the culture war front, you can already see where the PC Left will object. They will decry MacArthur, Patton, and Murphy as agents of American imperialism. They will condemn Reagan, Scalia, and George Washington as dead white men and, by definition, racists. They will pillory Booker T. Washington, Jackie Robinson, and Dr. King as Toms and on and on until the Garden is reduced to Beyonce, Angela Davis, and Gus Hall.

By starting this brouhaha the president has realized, as have countless others who can read modern history, that the most cutthroat political fights these days are not on economics or national security, but on cultural matters. The president has laid down his marker on the traditional side of American history and told the Left to come and get him. It is a beautiful trap.

Some pros amongst the Democrats and the Left will see the incipient ambush and walk around the issue. But many, those who froth with Bolshevik spite and bitterness, will plunge headlong into the minefield and…kaboom.

Well timed for November, their exploding political torsos will be tossed high over the American electoral landscape and will remind voters just why the Democrats stepped into the deadly ground in the first place. As such: Set, game, match goes to Trump.