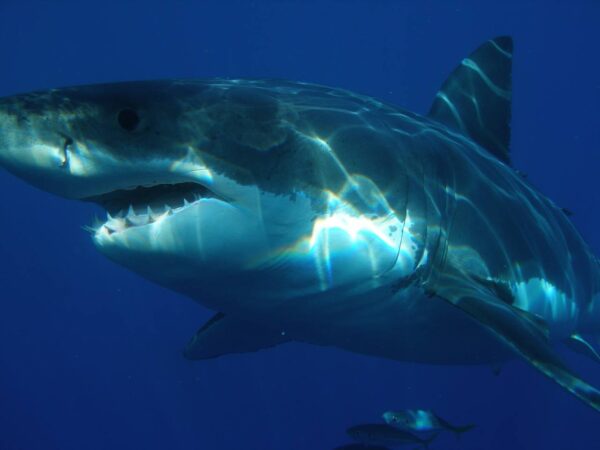 Just when we thought 2020 could not get any worse, it’s been reported that great white sharks have been spotted lurking off beaches in the New York City area.

The New York Post reported [1] that at least three massive great white sharks have been spotted near shore, with a fourth moving in that direction as well. A fifth huge shark that has been named the Mary Lee and weighs in at 16 feet and 3,456 pounds could be hanging around the area also, experts say.

Mary Lee had a tracker on her that stopped working in 2017 when its five-year battery wore out, but experts believe her to be alive and well. One of the new sharks is named Vimy, a 1,164-pound behemoth nearly 13 feet long that was first tracked on Friday in the deep ocean off Delaware and southern New Jersey. He could just be doing a quick dive-by as he heads for the cool waters off the coast of Canada.

Great whites are particularly terrifying sharks because they are known to have upward of 3,000 serrated, blade-like teeth that can each grow to six inches long. The creatures fear nobody, which makes them all the more scary. Experts, however, have said that members of the public should not go too overboard when it comes to fearing shark attacks.

“The drive to the beach is much riskier than swimming with sharks in the water,” said Paul Sieswerda, head of Gotham Whale [2], a research and advocacy organization based in New York City.

Sieswerda added that the appearance of great white sharks is actually a positive thing, as it is a sign that the local waters are healthy. He said that New York can expect more sharks to show up in the coming years if seals start to pop up there, as they have in Cape Cod, Massachusetts.

Chris Fischer, founder of the Ocearch shark tracker, agreed that there will likely be “a steady slow increase in shark numbers.” He added that five great whites are “no more than normal,” and that they are following typical migration patterns.

Fischer also said that the presence of great whites is “a thing to celebrate” because the creatures prey on the weak, which virtually promises robust marine-life stocks and guarantees that “everyone will see an ocean full of fish for generations, and our great-grandkids will be able to enjoy fish sandwiches and lobster rolls deep into the future.”

That being said, he did urge people to still take precautions, saying, “Be smart. Don’t swim out into the ocean if you see a bunch of seals, baitfish crashing, and birds diving.”