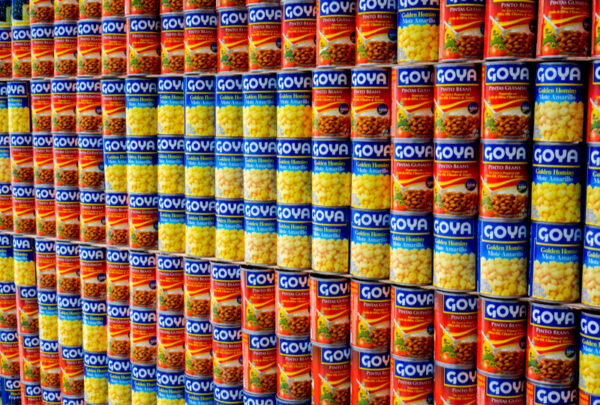 Goya Foods CEO Bob Unanue said on Friday that he is not surrendering to a boycott over his visit to the White House.
“We’re all truly blessed at the same time to have a leader like President Trump, who is a builder,” said Unanue, who is of Latin descent, at the White House event.

“We were part of a commission called the White House Hispanic Prosperity Initiative and they called on us to be there to see how we could help opportunities within the economic and educational realm for prosperity among Hispanics and among the United States,” Unanue told the media.

Goya is a staple of Cuban food. My grandparents ate Goya black beans twice a day for nearly 90 years. And now the Left is trying to cancel Hispanic culture and silence free speech. #BuyGoya [1] https://t.co/Mhb7inVKWl [2]

Behind Mexico, the United States is the second-largest Hispanic country in the world.

Liberal Hispanic-hating politicians and airhead Hollywood celebrities are boycotting Goya, the largest Hispanic-owned food company in the country, because of the CEO’s praise of the president. But the American public is doing the opposite and from coast to coast, New York to California, Goya products are flying off shelves as consumers who have not previously purchased Goya products are doing so now in support of the CEO and President Trump.

On Saturday afternoon at a Giant grocery store in Severna Park, Maryland, a quiet DC suburban community that is not exactly a hotbed of Latin culture or residence, Goya products were quickly disappearing, as shoppers prepared to make meals with such Hispanic staples as Mojo marinade and classic Latin spices such as coriander and annatto.

Goya has also been a leader in philanthropy, donating millions of pounds of products to food kitchens and homeless shelters around the nation.

Goya continues to work for the prosperity & education of our country! #GOYAGIVES [4] two million pounds of food to food banks across the nation who are in desperate need of food for families impacted by COVID19. pic.twitter.com/ZUdxRUnpBl [5]

At the event in question, Trump hosted Hispanic leaders at the White House on Thursday and signed an executive order on the White House Hispanic Prosperity Initiative to use more taxpayer support for private and charter schools and “improve access by Hispanic Americans to education and economic opportunities.”

Self-hating Hispanics Rep. Alexandria-Ocasio Cortez (D-NY) and failed former Democrat presidential candidate Julian Castro of Texas pathetically tried to curry favor with Anglo-Saxon liberals by bowing and scraping before the altar of political correctness. To no avail, as their cowardice and Quisling behavior only cemented their image as craven sellouts of the culture practiced by people of their own heritage. Though one must admit, as both are of Puerto Rican and Mexican heritage respectively, a savory Cuban and/or South American meal may be beyond their culinary ken.

In alliance with the Uncle Tacos, a number of comically stupid celebrities took aim at Goya on social media with hashtags like #BoycottGoya and #GOYAWAY. Many urged people who use Goya products to start buying foods produced by the company’s competitors. As reported earlier, Americans are doing exactly the opposite, which shows the respect most Americans have for the counsel of the Hollywood crowd.

Goya CEO Unanue called the pushback a “suppression of speech.” Unanue said that he was previously invited to the White House for an event hosted by the Obama administration for Hispanic Heritage Month.

“So, you’re allowed to talk good or to praise one president, but you’re not allowed to aid in economic and educational prosperity? And you make a positive comment and all of a sudden, it is not acceptable,” Unanue said. He said he is not apologizing for his remarks supporting Trump’s economic policy and would not turn down other future invitations. Why would he? The Trump invitation and subsequent liberal boycott has made his company lots of money.