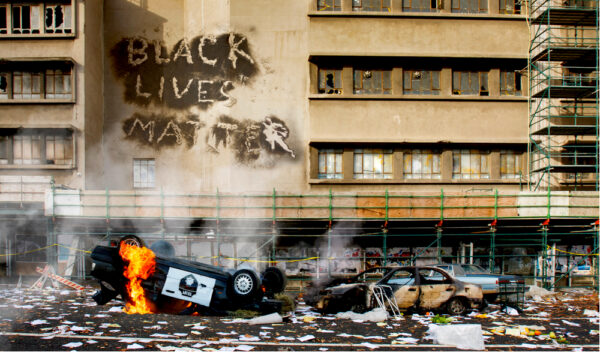 Finally, however, people are beginning to wake up to the grim reality of what we’re really dealing with here. I was happy to relate [1] the current state of play on “Tucker Carlson Tonight” recently. In case you missed it, here’s the recap:

BLM was never a mainstream or moderate movement. From the very beginning, it trafficked in violent rhetoric about killing [2] police officers, which the establishment Left either ignored or excused [3]. We police officers, of course, knew that we were dealing with a genuine threat.

The first cracks in BLM’s façade began to show in 2016, when the group couldn’t help but include anti-Semitic talking points about Jews committing “genocide” in Palestine as part of an ideological manifesto. It was widely condemned [4] in the Jewish press at the time [5], but swept under the rug by the rest of the mainstream media.

Now, of course, we can all see the truth: BLM was founded and is to this day held together by communists. Last month, a video emerged, showing BLM co-founder Patrisse Cullors [6] describing [7] herself and another co-founder as “trained Marxists.”

It shouldn’t have been a surprise to anyone familiar with BLM’s history and background. Cullors has long been open about her ties to communists —including terrorists— while the co-founder she referenced, Alicia Garza, has been equally open about her affinity [8] for cop-killing communist Joanne “Assata Shakur” Chesimard.

Then, we learned that BLM’s fundraising operation —the tax-exempt “charity” raking in millions in corporate guilt checks— is run [8] in part by none other than Susan Rosenberg, the convicted “May 19th Communist Organization [9]” terrorist.

Once again, astute observers could see this coming. Back in 2018, BLM darling Tamika Mallory landed in hot water over her unapologetic support [10] for Nation of Islam leader Louis Farrakhan, a man whose cult preaches that white people are not true humans but, rather, “devils” genetically “grafted” by a mad scientist named Yakoob.