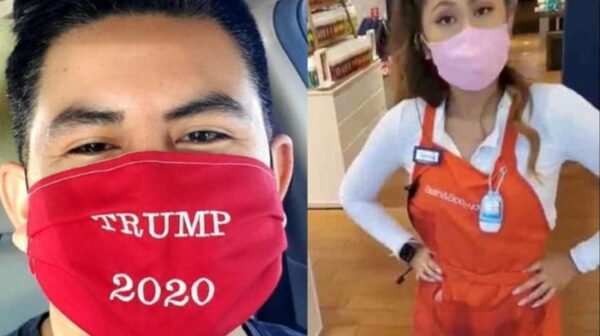 A Bath & Body Works just got hit with a brutal dose of karma after she screamed “f*** Donald Trump” at a customer, afterward finding herself unemployed.

It all started when Jeremiah Cota, director of strategic initiatives for AZ Trump Victory, took to Twitter last Friday to post a video of him being “accosted” by the manager of a store in Scottsdale, Arizona. In the video, Cota confronts the woman about saying “f*** Donald Trump” to him, and she stands by her comments.

“Yeah, because that’s how I feel,” she can be heard saying when Cota asks her to confirm her comments.

Ironically, the manager’s nametag says that her name is “Karren,” which should make her eligible for the “Karen” memes that are currently sweeping the Internet!

I was accosted by @bathbodyworks [1] manager simply for wearing a Trump face mask. She yelled at me "F—- Donald Trump" while I was simply walking by the store.

I went to ask if I misheard her and she said no.

Trump Victory Committee spokesperson Keith Schipper told Arizona Central [4] that this incident is just one of many cases of “intolerance” that supporters of the president are hit with every day.

“All of our hopes is that there can just be more tolerance so supporters of the president don’t have to have their head on a swivel, looking over their shoulder, wondering who’s going to accost them,” he added.

Bath & Body Works later contacted Cota directly to say “how very sorry they were” that this happened, adding that they “respect all beliefs.”

“We absolutely do not condone these actions as all customers should be treated with respect,” Bath & Body Works said in a statement to the press. The company also confirmed that the employee who was caught on camera in the video no longer works for the brand.

Despite the fact that the leftwing media tries to depict conservatives as the “intolerant” ones, anyone on the Right knows just how intolerant liberals really are these days. Wearing pro-Trump gear out in public means putting oneself at risk from all kinds of attacks from crazed leftists who have been indoctrinated with the belief that conservative Trump supporters are the root of all evil.

We’re glad that in this case at least, someone on the intolerant Left’s side ended up on the losing end when trying to shame a supporter of President Donald Trump.