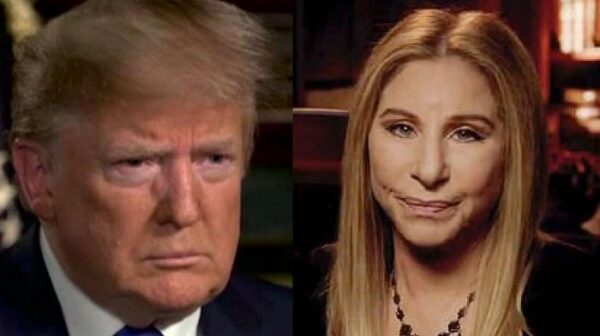 During a fundraiser for Joe Biden that was hosted by former late night talk show host Jay Leno, Hollywood stars took turns bashing President Donald Trump like it was their job.

Singer and actress Barbra Streisand had some of the harshest words for Trump, and she held nothing back in attacking him when it was her turn to speak.

“Let’s face it, Trump is unfit, mentally and morally, to hold this distinguished office,” Streisand said during the fundraiser, which was streamed on Facebook [1]. She went on to heap praise on Biden, who she described as a “decent and ethical man with an open mind and open heart.”

Streisand also blatantly lied when she claimed that the riots that have taken over the cities of Portland and Seattle are “peaceful.”

“The military was designed to protect us, not attack us. But a few weeks ago, Trump called out the troops against peaceful protesters. That’s what cowards to when they are scared. Donald Trump has failed us,” she said.

“And we cannot survive four more years of his incompetence. I’m sad and embarrassed by his lack of humanity.”

“He will listen to people rather than greeting them with guns. All they want is justice. It’s as simple as that.”

She also said that Biden would lead with “grace and dignity who has respect for the truth unlike Trump, who doesn’t believe in facts.”

Streisand was the last person to speak during the fundraiser, which Leno claimed raised over $760,000.

This is far from the first time Streisand has attacked Trump, as the 77 year-old star has previously made it clear that she would do and say anything to hurt his chances of reelection.

Earlier this year, she dramatically warned that America could be “extinguished” if Trump wins reelection in November.

“Every day, he takes another swipe at the pillars of our democracy, but we cannot allow him to irrevocably change this country,” Streisand wrote in a piece for Variety [2] back in March. “The ‘beacon of hope’ that is America could be extinguished if he’s given another four years.”