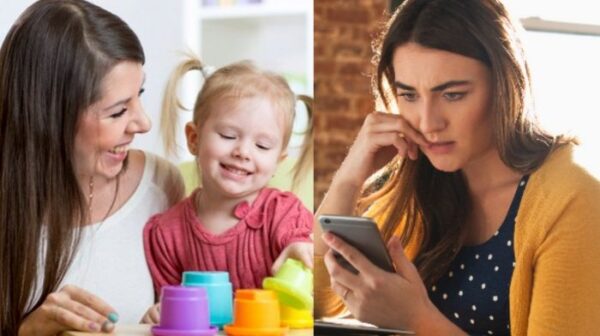 A mother was just left stunned after her babysitter quit her job upon finding some text messages on the mom’s iPad.

A reddit user who uses the username of Life-of-a-midwife posted about the embarrassing situation on the social media site’s r/AmITheA******* [1] forum. In the post [1], which quickly went viral, the user explained that her babysitter who watched over her two young daughters while she and her husband were at work had “always been great.”

“One day, she was about 10 minutes late which made me late for work,” she said. “It’s fine because it hasn’t happened before, and she apologized and I thought we were all good.”

Things went downhill the next day, however, when the babysitter told her that she had been helping her daughter on her iPad and found some texts from her husband that came up on the screen.

“I was complaining to him that the babysitter was late that morning and it made me late to work. Well, she kept reading and read all our texts for the past month,” she continued. “It was just funny banter, and I got over it quickly but I was still whining.”

Days later, the babysitter texted her minutes before she was supposed to come over saying that she was quitting “because of those texts.”

“She was really hurt I would complain about her to him,” she said. “I feel horrible but also violated that she read all our texts.”

Social media users were divided over who was in the wrong here, with some people criticizing the babysitter.

“I would have fired her for reading through the texts. Seeing the one that popped up is one thing. Looking back through is another altogether,” one user wrote, with another adding, “Thats such an invasion of privacy.”

“She crossed a line reading those texts and quitting because she ate all the Oreos and found out you were mildly inconvenienced by it,” a third user added.

Others, however, criticized the mother.

“It’s probably not a good idea to be logged in with your personal account to a public device,” someone commented, with another person adding, “You can’t really be mad at her. She deserves to know what you’re saying about her behind her back.”

Who do you think was in the right here? Let us know in the comments section.

This piece originally appeared in UpliftingToday.com [2] and is used by permission.

Read more at UpliftingToday.com:
Mel Gibson Is Fired From Movie After Winona Ryder Accuses Him of Calling Her a Jewish ‘Oven Dodger’ [3]
Four Officers Fired for Death of George Floyd May Get Their Jobs Back [4]
Loretta Lynn Reveals Her Sadness At The Turmoil In America – ‘We Need God Right Now’ [5]