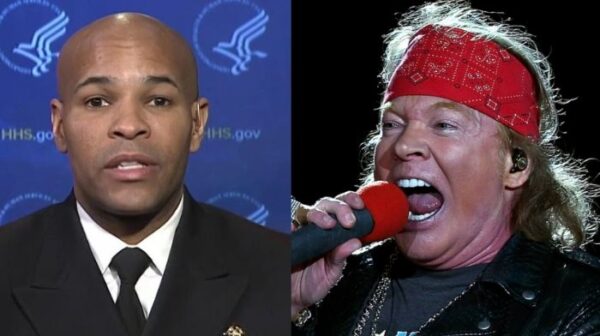 Guns N’ Roses frontman Axl Rose just completely unraveled and launched a profanity-laced rant about U.S. Surgeon General Jerome Adams, who he has branded a “coward” and a “piece of sh*t,” going so far as to demand that he resign.

While appearing on the “Today” show [1] on Friday, Adams was asked if Americans should be attending large gatherings for the Fourth of July celebration. “It’s not a yes or no,” Adams said. “Every single person has to make up their own mind. There are going to be people going to beaches, going to barbecues, going to different environments. And they have to look at their individual risk.”

This apparently caused Rose to lose it. After calling Adams a “coward” and a “POS” (piece of sh*t), Rose wrote, “Resign. U don’t deserve the job or title. America deserves better.”

Jerome Adams is
a: A coward
b: A POS
c: Both
Resign. U don’t deserve the job or title. America deserves better.

Adams quickly fired back at him by tweeting, “Hey Axl – appreciate your passion (and your music). How about helping me save some lives by sharing the message about staying safe, and using face coverings?!”

Hey Axl – appreciate your passion (and your music 🎸). How about helping me save some lives by sharing the message about staying safe, and using face coverings?! 😷👇🏽https://t.co/GtwMggagh4 [3]

This did not sit well with Rose, to say the least. “Awesome! n’ thanks!” said Rose. “U [sic] wanna start by telling peeps to avoid large gatherings? Or u [sic] want me to? Shame we didn’t get that out there 4 [sic] this wkend [sic] like on TV.”

Awesome! n’ thanks! U wanna start by telling peeps to avoid large gatherings? Or u want me to? Shame we didn’t get that out there 4 this wkend like on TV.🙁🇺🇸

The 58-year-old singer was so furious about this exchange that he felt the need to release a lengthy statement [6] in which he explained why he feels it’s his duty to publicly challenge Donald Trump’s administration:

My disdain 4 r current administration n’ what I perceive as it’s threat to r democracy is no secret. I’m not all that active w/social media n’ tho I more than appreciate anyone who takes an interest in something I might post I don’t really have an interest in how many followers or retweets etc. I have as my political or social issue posts rn’t about me. They’re about the issues.

In general my posts in regard to current events, politics or social issues r usually coming from a sense of outrage, obligation n’ responsibility to say something at times when I feel not to is being complicit (as opposed to a desire for attention or self promotion.) I’m nobody, just a citizen that like everyone else has my own opinions n’ believes in my heart that ultimately I want what’s best for not just r country but for humanity, wildlife n’ r environment n’ other’s as opposed to right, left or any other wing fascism r at least in this country free to disagree.

So 4 me when I feel someone in this administration for example or perhaps media, in entertainment or the public says or does something that in my view supports or caters to the irresponsibility of this administration or various issues w/government or law enforcement I may voice an opinion. Perhaps a strong or perhaps considered by some a lewd or immature response or opinion. It happens.

Conservative fans of Rose will undoubtedly be disappointed to see that he is just another radically leftwing narcissist in the entertainment industry. Sad!