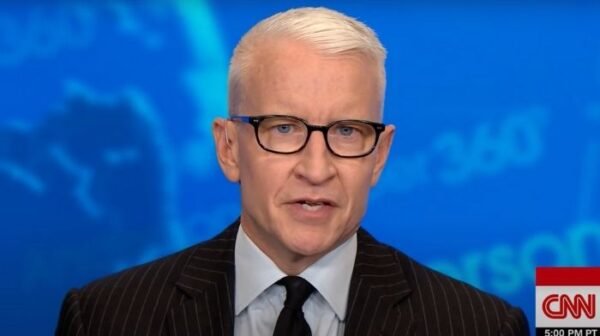 CNN host Anderson Cooper just took his hatred for President Donald Trump to a whole new level when he claimed that the president doesn’t care about the “health and safety” of American children, parents, and teachers.

During his show on Wednesday, Cooper outrageously claimed that President Trump doesn’t care about the “health and safety” of Americans simply because his administration is trying to reopen schools as soon as possible.

“Today the president of the United States did something rare: He expressed a notion that we can all agree on, that kids belong in the classroom — but then made it quite clear beyond what it means to himself and his re-election, he doesn’t actually care about those kids at all,” Cooper said. “He doesn’t care about their health and safety, nor the health of their teachers and parents, and federal guidelines for keeping them safe.”

“The president bragged today about getting the CDC to change their guidelines to weaken them, and lo and behold, the CDC, which used to be a world-respected organization, they are going to come up with new guidelines, less difficult ones,” the CNN host added. “Just think about that. The CDC puts together guidelines based on science to protect kids and teachers, staying six feet apart and masks and having airflow in rooms and washing hands, and because the president thinks it’s too difficult, the CDC is going to weaken them.”

Not stopping there, Cooper went on to double down:

“We don’t want guidance to be too tough, the vice president said. Let’s just have guidance based on magical thinking or a pamphlet written by the advisers Diamond and Silk. The president threatened retribution for schools. I’m quoting a tweet, ‘In Germany, Denmark, Norway and Sweden schools are open with no problem, Dems think it would be bad politically if they open schools before the November election but important for the children and families, may cut off funding if not open.’ Germany, Denmark, Norway and Sweden, I want to show you what life looks like in those four countries.”

Cooper then continued on as he held up a graph showing the rate of new cases.

“Germany reported 279 new cases yesterday, according to Johns Hopkins University data, and Denmark 10, Norway 11, Sweden 283. The total of 583 new cases yesterday in a population of about 100 million. As for the United States, we have more than 60,000. 60,000 new cases. Today we surpassed 3 million since the outbreak began. One hundred thirty-two thousand lives lost, cases rising 35 states holding steady in 12 falling in just three. That is the reality today. Tomorrow looks worse, not better.”

Cooper and his fellow liberals are in no rush to see schools and the rest of the country reopen, as they are hoping the continued closures will ruin Trump’s chances of being reelected. Their hatred for Trump is so great that they don’t care how many American lives are ruined in the process, as long as they achieve their goal of taking the president down.

Never forget that Democrats would rather see America fail than see Trump succeed.