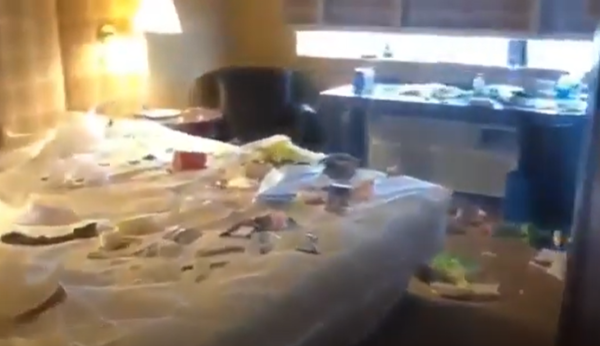 According to a report from the Minnesota Reformer, over 200 homeless people took over a Sheraton hotel located just blocks from where George Floyd died and turned it into a “commune” during the recent riots. They’ve since been kicked out by the hotel proprietors, and new video has been released showing the devastated condition they left the hotel in.

It’s hard to imagine that Americans would wreak this degree of destruction within their own country. Watch the following video:

Earlier this month, left-leaning Vice wrote an article of the hotel takeover which romanticized the nature of the event—practically glorifying it. The piece indicates that “volunteers negotiated the takeover of the hotel with the support of the hotel’s owners on May 29.” Vice goes on to say that the “shared living space” was being run like a commune and that residents were running their own meetings where they “collectively determined their needs and wants” and communicated them with volunteers.

One volunteer tweeted on June 2: “The sanctuary is controlled by the community. Residents are running their own meetings about what they need and what they want with the support of the coordinators/volunteers. It’s harm reduction. It’s mutual aid. It’s community control.”

The hotel owners have since reclaimed their property, and the video showing the condition the “sanctuary” was left in shows a very different picture than what the unicorn-and-rainbow leftists tried to paint in recent weeks. The hotel is essentially in ruins. It looks more like a hotel in war-torn Baghdad than anything you’d ever expect to see on American soil. Is this what leftists really consider a “sanctuary”? Is this the vision they have for all of America?

Imagine if Trump’s supporters did something like this in cities across America. The mainstream media would be having a collective meltdown. Instead, the media rarely even reports stories like this one. On the rare occasion they do, it’s generally downplayed like an isolated event, and they go out of their way to distance the Democratic Party from the leftists who do this type of damage. More and more Americans know better: Vote accordingly.