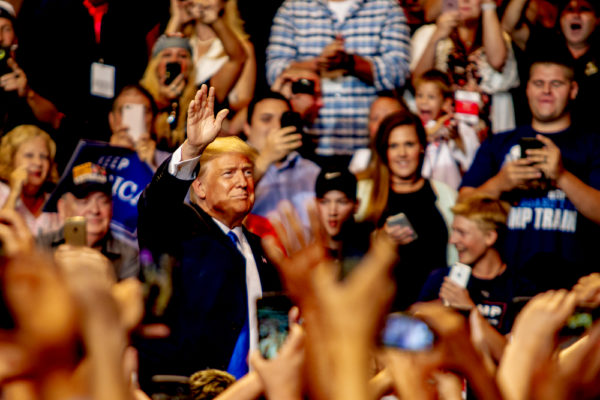 If there ever really was a legitimate public health reason to stop President Donald Trump’s signature rallies because of social distancing, it surely has ended with the Democrat hypocrisy showcased at George Floyd events. As such, President Trump will be back on the campaign trail within two weeks, the campaign announced Monday.

A Democrat propaganda outlet, National Public Radio criticized his decision but was strangely quiet, as was most of the media, when social distancing protocols were blatantly broken at Floyd memorials. So there was one rule for the liberals and another for everyone else. Conservative pundit Mark Hemingway knows where that is going.

The very same people who told individuals that they could not go to the funeral of a close family member because the virus could be spread now gather by thousands cheek and jowl to mourn a false icon. Their hypocrisy, their double standards, their lying sh**baggery, is par for the course with Democrats. It will be good once again to hear the president call them out on it in front of throngs of enthusiastic voters.

Trump campaign manager Brad Parscale told Fox News, “Americans are ready to get back to action and so is President Trump. The Great American Comeback is real and the rallies will be tremendous. You’ll again see the kind of crowds and enthusiasm that Sleepy Joe Biden can only dream of.”

The resumption of the rallies will certainly improve the spirits of the Trump rank and file. Some may be upset over a poll on Tuesday that has the president down 14 points against Joe Biden. But it is a CNN poll, thus dishonest by definition, and thus can be discounted as any serious data. However, do not confuse rallies with raw electoral strength, as many Trump fans do. Rallies are momentum building and a boost to the psychology of a campaign. They do not directly translate into support, as many vital swing voters do not attend them. Thus the rallies are mostly preaching to the choir.

As late as March 9th, Dr. Anthony Fauci was telling the media that the president’s rallies could be problematic. “You know, I can’t comment on campaign rallies,” Fauci told reporters. “It really depends. We are having as we all said— this is something in motion. This is an evolving thing. … If you want to talk about large gatherings in a place you have community spread, I think that’s a judgment call, and if someone decides they want to cancel it, I wouldn’t publicly criticize them.”

But there are those who wonder, given how quickly the Democrats and the media threw that narrative under the bus, whether it was ever true in the first place. Even usually anti-Trump pundit Jonah Goldberg is doubtful, per the rapid turnaround on the media and Democrat message: “We spent the last couple of months being hectored by public health experts and earnestly righteous media personalities who insisted that easing lockdown policies was immoral, that refusing to social distance or wear masks was nigh upon murderous. They even suggested that protests were somehow profane. But now that the George Floyd protests are serving as some kind of Great Awokening, many of the same are saying ‘never mind’ about all of that. Protests aren’t profane, they’re glorious and essential—if they agree with what you’re protesting about.”