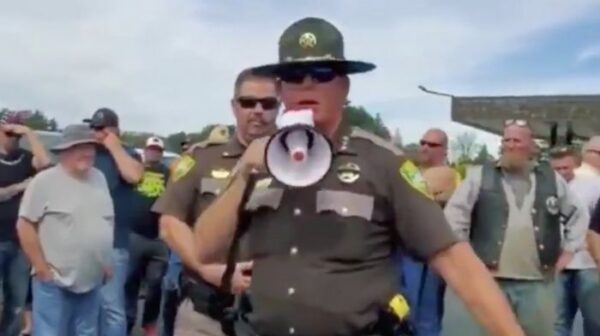 A sheriff in Washington state is speaking out to urge locals to defy the liberal governor’s statewide face-mask orders, much to the Democrat governor’s dismay.

Governor Jay Inslee’s order that everyone must wear a face mask in public places went into effect on Friday, and anyone caught violating it will be hit with a misdemeanor that could result in up to 90 days in jail or a $1,000 fine, according to The Blaze [1].

While speaking to a crowd in a church parking lot in Napavine, Lewis County Sheriff Robert Snaza fired back by urging local residents to defy Inslee’s order, telling them “don’t be a sheep.”

“In case you guys didn’t hear, Gov. Inslee in his infinite wisdom has decided after over a hundred and some odd days that we should all wear face masks — inside and out,” the sheriff said.

“In case you guys didn't hear, governor Inslee in his infinite wisdom, is deciding after over a hundred and some odd days, that we should all wear face masks inside and out. Here's what I say… don't be a sheep." Sheriff Robert Snaza, Lewis County, WA pic.twitter.com/UMT9bUEDWD [2]

The crowd, which consisted of many people waving American flags, erupted into cheers as soon as they heard this.

Inslee has since responded to Snaza’s comments in a press conference.

“I think we have to be disappointed in any law enforcement officer who would encourage illegal behavior,” the governor said [4], adding that wearing a mask during the coronavirus pandemic “is about demonstrating our respect and care for the other people around us.”

Sheriff Snaza, however, has stood by his comments, saying that he doesn’t believe that wearing a mask actually lowers the spread of COVID-19.

He also does not think police should be getting involved if someone chooses not to wear a mask.

“Yet we’re telling people now to wear it and if you don’t wear it, we’re going to cite you for that,” the sheriff explained.

Klickitat County Sheriff Bob Songer also slammed Inslee for his order, accusing the governor of being an “idiot” and of “overstepping his bounds, violating people’s constitutional rights.”

Sheriffs in Clark and Cowlitz counties said they won't strictly enforce the mask order, but will instead "educate."

Lewis County's sheriff tells people not to be "sheep" for following the order. And here's Klickitat's sheriff Bob Songer (pic from his official page, too). pic.twitter.com/WE6EX7JZ5g [5]

Sheriff Snaza has since spoken out to clarify that he didn’t necessarily mean that he would blatantly violate the governor’s orders himself.

“Just because I said ‘don’t be sheep’ does not mean that I’m outwardly saying I want you to violate the orders,” he explained. Inslee responded by saying that he appreciated this clarification, and that Snaza was being “very helpful.”