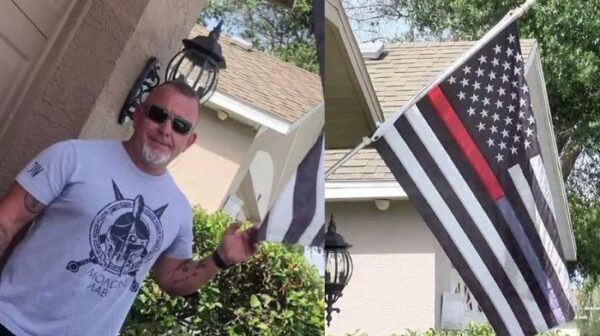 A retired sheriff’s deputy is fighting back after his homeowner’s association (HOA) ordered him to take down a Blue Lives Matter flag that he proudly had hanging in front of his house.

Sean Kennedy spent 25 years working as a sheriff’s deputy in Pasco County, Florida, which is why he wanted to honor law enforcement by flying a Blue Lives Matter flag outside of his home in New Port Richey, a town north of Tampa. Kennedy recently received a letter from his local homeowner’s association, which claimed that he was violating the neighborhood’s rules regulating the display of only the American flag.

Kennedy was told that he has 14 days to remove the flag or face “further action,” according to WFLA-TV [1]. “While we support your patriotism, the American Flag does need to be the traditional American Flag,” the letter stated in part.

Kennedy, however, has no intention of cooperating with this request. “I’m not taking it down. It’s something I’ve worked for for 25 years and I believe in, so, and it’s definitely not racist, it’s definitely not hatred,” Kennedy said. “It’s just a tribute to law enforcement officers and firemen who died.”

He went on to add that he is aware that someone in the neighborhood complained to the HOA about the flag as anti-police tensions continue to be at an all-time high in the wake of the death of George Floyd, who died in police custody in Minneapolis, Minnesota last month. “I think it’s self-explanatory what’s going on in the world,” said Kennedy. “The hatred of the police because of one horrible action by a guy in Minnesota just tarnishing everybody.”

It’s unfortunate that we live in a time where even saying “Blue Lives Matter” and supporting the police officers who put their lives on the line for us every day is seen as controversial.