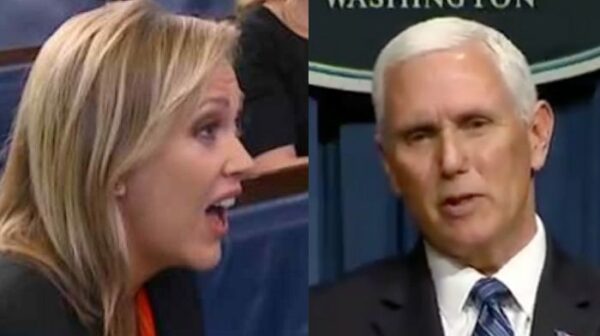 Vice President Mike Pence just epically shut down CBS White House correspondent Paula Reid after she suggested that he is a hypocrite for attending campaign rallies during the coronavirus pandemic.

Reid tried to attack Pence during a White House coronavirus task force briefing Friday, claiming that he and the rest of Donald Trump’s administration have set confusing examples when it comes to what is safe and what isn’t amidst the COVID-19 pandemic.

“On the campaign,” Reid began, “it really does sound though like you’re saying ‘Do as we say, not as we do.’ You’re telling people to listen to local officials, but in Tulsa, you defied local health officials to have an event that, even though you say didn’t result in a spike, dozens of Secret Service agents, dozen of campaign staffers are now quarantined after positive tests.”

She went on to cite President Trump’s rally in Tulsa, Oklahoma last week, questioning Pence as to how large rallies would not increase the risk of spreading coronavirus.

Pence, however, was not having any of it.

“I want to remind you again that the freedom of speech and the right to peacefully assemble is enshrined in the Constitution of the United States,” he said, according to The Blaze [1].

“Even in a health crisis, the American people don’t forfeit our constitutional rights.”

.@PaulaReidCBS [2] asks Pence about the Trump campaign holding major campaign events in Oklahoma and Arizona, contradicting health experts who warn against mass gatherings: "How can you say that the campaign is not part of the problem that Dr. Fauci laid out?" https://t.co/Nj065CIsxp [3] pic.twitter.com/eMFTh4fxKG [4]

Not stopping there, Pence explained that it is crucial that America get back to business as usual, as the election cycle continues.

“[I]t’s so important that we recognize, as we issued guidance to reopen America, now two months ago, and as all 50 states are opening up the country, people are going back to work,” he said. “American everyday life is being restored one step, one day at a time. I think it’s important that we remind ourselves this is not a choice between the health of the American people and a strong economy.”

Pence also pointed out that there are “profound health implications” for people who remain in lockdown for lengthy periods of time.

“People need to be back to work. And so, our objective here today is to make sure the American people know in 34 states the cases are largely stable and there’s no combination of rising cases and rising positivity rates,” he said.

“That’s a tribute to the American people.” Reid and her fellow liberal reporters will definitely be thinking twice before they mess with Pence again!