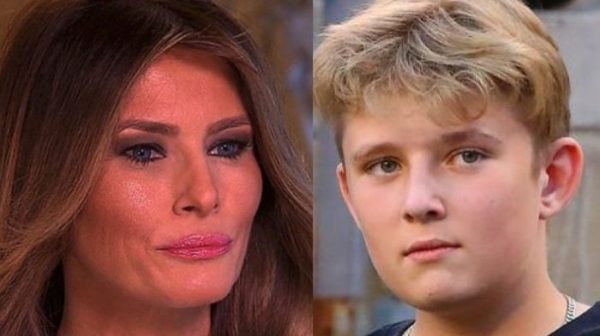 First Lady Melania Trump is firing back to protect her 14-year-old son Barron after Food Network host John Henson [1] made comments about him on Father’s Day that she said were “inappropriate and insensitive.”

“Sadly we continue to see inappropriate and insensitive comments about the President’s son [Barron Trump],” Melania’s spokeswoman Stephanie Grisham said in a statement released to The Daily Caller [2]. “As with every other Administration, a minor child should be off limits and allowed to grow up with no judgment or hate from strangers and the media.”

This comes after Henson posted an offensive tweet on Father’s Day in which he implied that President Donald Trump isn’t really Barron’s dad. “I hope Barron gets to spend today with whoever his dad is,” tweeted the TV host and standup comic.

I hope Barron gets to spend today with whoever his dad is.

Henson posted his tweet after Washington Post reporter Mary Jordan [4] wrote a book in which she claimed that Melania was in no rush to move to the White House after her husband won the 2016 presidential election, and that she refused to move their for months so that she could renegotiate her prenuptial agreement. Sources told Jordan that Melania used this time to “amend her financial agreement with Trump — what Melania referred to as ‘taking care of Barron,’” according to CNN [5]. Melania has flatly denied the comments that Jordan made about her in her new book. “Yet another book about Mrs. Trump with false information and sources,” Grisham told The Hill [6]. “This book belongs in the fiction genre.”

Despite the fact that Barron is under age, and Malia and Sasha Obama were viewed as “off-limits” to attacks during their father’s presidency, the 14-year-old boy has been repeatedly mocked by prominent liberals throughout his father’s presidency. Rosie O’Donnell has pushed the unfounded conspiracy theory [7] that Barron is autistic, and the late Peter Fonda even called [8] for Barron to be “put in a cage with pedophiles.” It’s absolutely disgusting that Barron continues to be attacked by liberals who dislike his father, and Henson owes him an apology for his despicable comments.