John Wayne next to go to the cancel culture guillotine

His namesake airport is under fire from California Democrats.

The thuggish march to tear down America’s history and culture shows no sign of stopping, as cancel culture fascists targeted patriotic and iconic American actor John Wayne on Friday.

California Democrats in Orange County are supporting a move to rename the county’s John Wayne Airport. They also demand Wayne’s likeness be removed from the airport, over “racist and bigoted statements” made by the American film star decades ago.

Wayne gave an interview to Playboy magazine almost fifty years ago. In it he made some problematic statements. But they are no worse than statements made by Joe Biden years later. Do these same Democrats have a problem with Biden? No. So again the hypocrisy of Democrat double standards is highlighted.

There have been pushes to rename the airport as a result of those Playboy magazine comments after they resurfaced. Wayne’s defenders have said it is unfair to judge him based off remarks made nearly 50 years ago, and when he is no longer alive to defend or even retract them.

The defenders have a point. It is absurd to judge 1970s Wayne by 2020 cultural and political standards—he was a man of another time. 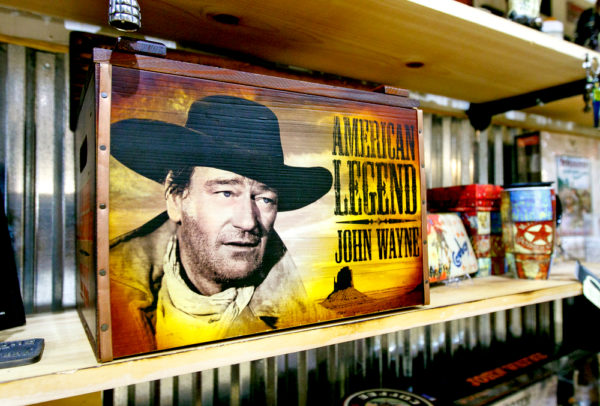 The Democratic resolution supports a “national movement to remove white supremacist symbols and names is reshaping American institutions, monuments, businesses, nonprofits, sports leagues and teams, as it is widely recognized that racist symbols produce lasting physical and psychological stress and trauma particularly to black communities, people of color and other oppressed groups, and the removal of racist symbols provides a necessary process for communities to remember historic acts of violence and recognize victims of oppression.” It must have been difficult to shove that much Marxist jargon into only one statement.

In a related story, rioters in Portland, Oregon tore down a statue of Thomas Jefferson outside a high school that was named after him. No mention that he wrote the Declaration of Independence or expanded the nation —to include Oregon— in the Louisiana Purchase. No mention he founded the University of Virginia or was the third president of the United States.

Thomas Jefferson statue now toppled over at Jefferson High School. This was the meeting spot for tonight’s march in Portland. Wasn’t like this before we left at 7:15.

A speaker here says, “We’re taking the city back, one racist statue at a time.” #Portland #breakingnews pic.twitter.com/PiRh00yPzv

A rioter said, “There’s an interesting piece of history up here… Mr. Thomas is all beside himself. We’re taking this city back. One school at a time. One racist statue at a time.”

In Alabama also, a statute of Confederate Admiral Raphael Semmes was removed from the state’s port earlier this month and shut away in a museum warehouse. And in New Mexico the Red Nation group was planning a protest for the removal of a statue of Spanish conqueror Juan de Oñate outside a cultural center in Alcalde. No word on the attitude on this statue of local Hispanic groups.