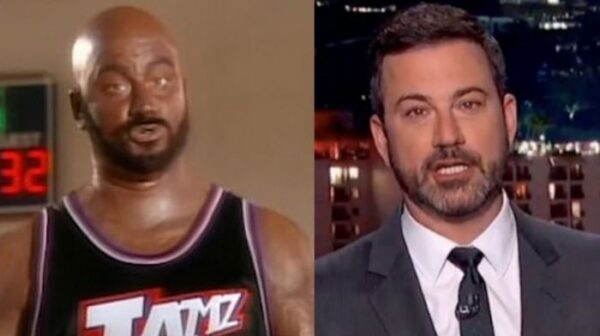 Late night television host Jimmy Kimmel has found himself in hot water this week. He has become embroiled in multiple racial controversies after his comedic past came back to haunt him.

Just two years ago, Kimmel begged comedian Tom Arnold to release a tape he claimed to have, one which allegedly featured President Donald Trump saying the “n-word” during his time on “The Apprentice.” Now, it appears that a new tape has surfaced that shows Kimmel saying the n-word multiple times, exposing him as the shameless liberal hypocrite that he is.

Fox News has obtained audio [1] from a song Kimmel recorded on a 1996 comedic Christmas album, “A Family Christmas In Your A–,” in which he mocked the rapper Snoop Dogg. On the Christmas song, the singer can be heard talking about a “fat n—- in a sleigh giving sh— away,” referring to Santa Claus, and a “n—– in the manger.”

“I told that motherf—er Santa, bring a pick for my afro,” the singer, who appears to be Kimmel, went on. The “three wise men” were described as “bringing gifts and sh– for baby boo in the hay.”

“Me and my n—– down in LBC, we’ll smoke that motherf—— Christmas tree,” he added. The cassette for the album includes liner notes that say it was co-produced by “Jim Kimmel,” who is credited for all “comedy material” on the album, aside from a few tracks. Kimmel is also shown prominently on the album cover.

Back in 2013, Kimmel fondly recalled recording the album during his podcast. “This is when Snoop Dogg first came out, hit the scene, and I used to imitate him by only saying, ‘You know what I’m saying?'” Kimmel stated.

“Jimmy, do you only do black people?” someone then asked, to which Kimmel responded, “I prefer them, yes.” Later in this same podcast, Kimmel showed off his imitation of black comedian George Wallace, and recalled how he “called the president of Comedy Central” from a New York City hotel room after he had been drinking with a friend. Kimmel has previously come under fire for wearing blackface while impersonating people like former NBA star Karl Malone and daytime talk show host Oprah Winfrey on “The Man Show” in the early 2000s.

Jimmy Kimmel in Blackface.
This is hard to find on YouTube even if you type word for word the title of the video, i had to go back to History to find the video I just stumbled upon.
Retweet and make this go viral for some accountability.#BLM [2] #BlackFaceKimmel [3] pic.twitter.com/q1thT4LLCw [4]

Kimmel has yet to apologize for or even acknowledge his racist history. Instead, he conveniently announced last week that he would be taking the summer off from his show, also claiming that there was nothing wrong and that he just wanted to spend more time with his family. “There’s nothing wrong me, my family is healthy, I’m healthy,” Kimmel said. “I just need a couple of months off. So, while I’m gone, a cavalcade of very kind and capable people will be filling in for me. I think you’re going to be very happy with them. They will be guest-hosting the show.“

The president’s son Donald Trump Jr. has since called Kimmel out and urged ABC to take action, as they undoubtedly would if a conservative personality had been caught with this kind of history. “To be clear, I’m 100% against punishing comedians for jokes, even bad jokes from unfunny hack comedians like Jimmy Kimmel…but according to the Left’s own woke rules that @jimmykimmel wants to force others to live by, it’s hard to see how @ABCNetwork allows him to keep his show,” Trump Jr. tweeted.

To be clear, I’m 100% against punishing comedians for jokes, even bad jokes from unfunny hack comedians like Jimmy Kimmel…but according to the left’s own woke rules that @jimmykimmel [6] wants to force others to live by, it’s hard to see how @ABCNetwork [7] allows him to keep his show. https://t.co/yYsC065pe1 [8]

Kimmel is undoubtedly learning the hard way right now, particularly about the drawbacks of the “cancel culture” that he has worked so hard to promote. By his own rules, Kimmel should be cancelled now. ABC executives will have shown that they are the ultimate hypocrites if they do not pull the plug on his show immediately.