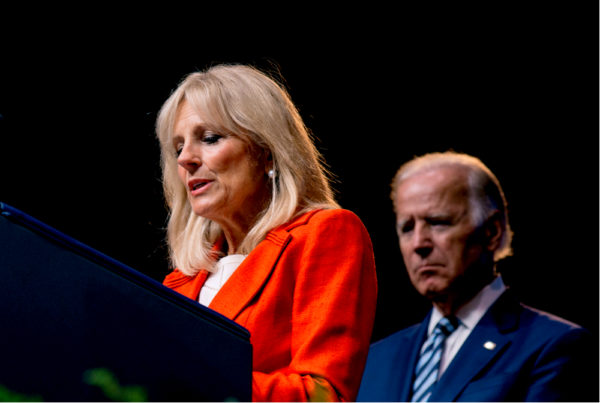 Jill Biden, the wife of Democrat presidential candidate Joe Biden, claims Republicans have been approaching her on the campaign trail to express their support.

Mrs. Biden said the voters have allegedly expressed their admiration for his moderate platform. “From what I’ve seen, a lot of Republicans are going to vote for Joe,” she said during an appearance on “The View” Tuesday. “You know, they’ve been saying it. Maybe they’re not saying it publicly…”

“When I was out there on the trail, a lot of people came up to me and said ‘Jill, I’m a Republican, but I’m going to vote for your husband because he’s a moderate, and he’s a steady leader and we believe in Joe,'” she asserted.

Jill Biden: “From what I’ve seen, a lot of Republicans are going to vote for Joe.” “I think a lot of his supporters have become disillusioned.” pic.twitter.com/pSB0TXFSUD [1]

Mrs. Biden was responding to claims by President Donald Trump, as relayed through “The View” co-host Meghan McCain, that there is overwhelming support for him in the Republican Party, as well as a “silent majority” out there who doesn’t admit to their support. “The vast silent majority is alive and well!” Trump tweeted over the weekend. “We will win this Election big.”

“Nobody wants a Low IQ person in charge of our country,” the president added, “and Sleepy Joe is definitely a Low IQ person!” According to the RealClearPolitics average [3] of recent polls, Biden is leading Trump by more than 9 points nationally. If 2016 showed us anything, there is without a doubt, a “silent majority” that does not express their support for Trump in polling data. He trailed Hillary Clinton in national polls by far greater numbers just a week or two from that election.

Critics contend that Biden’s frequent gaffes and confusing statements suggest he has dementia. Sixty-one percent (61%) of all voters believe it is important for Biden to address the dementia issue publicly, with 41% who say it is Very Important… https://t.co/nZIrwxgsmr [4] pic.twitter.com/uGsB4drlz9 [5]

Jill Biden’s comments have us wondering what kind of Republican voter is expressing their support for the Democrat candidate. Contrary to what she is saying, Biden has consistently been adopting extremist platforms espoused by radical socialists in his party. He currently supports open borders, suggesting illegal immigrants are more American than actual Americans [7], wants to provide government health care for aliens [8], has kissed the ring of AOC on environmental extremism [9], and supports taxpayer funding of abortions [10], which many in his party want legal up until birth [11].

So what Republicans view this man as a moderate? As for their support, a new Rasmussen Reports poll [12] indicates 66% of Republican voters think Biden is suffering from dementia. We would hope none of those people are going to vote for him.