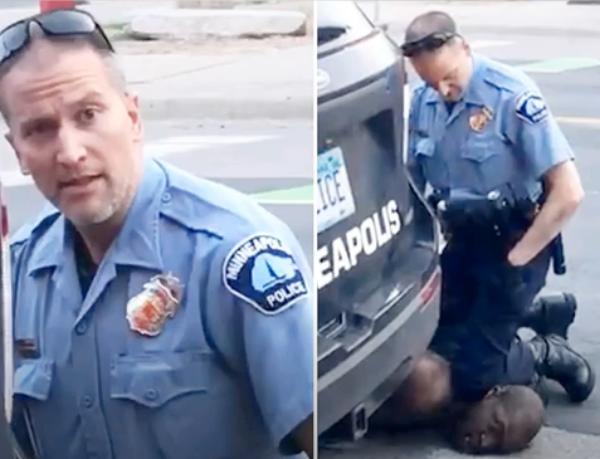 The four former police officers [1] who were involved in the death of George Floyd, who died in their custody in Minneapolis, Minnesota last month, appeared in court on Monday.

Fox News [2] reported that the four ex-cops appeared before Judge Peter Cahill, who proceeded to set a trial date of March 8, 2021 for them. He did not go into detail as to whether or not the four men would be tried together or separately.

Derek Chauvin, the 44 year-old ex-officer who was infamously caught on camera kneeling on Floyd’s neck, has been charged with second-degree unintentional murder, third-degree murder and second-degree manslaughter. It has been reported that nobody showed up to support Chauvin during his court hearing today.

The other three officers who were at the scene that day, Tou Thao, J. Alexander Kueng and Thomas Lane, are facing the charges of aiding and abetting murder and manslaughter. Kueng and Lane are both free after they each posted $750,000 bail, while Thao remains behind bars on $1 million bail without conditions or $750,000 bail with conditions.

Chauvin, who appeared remotely at the hearing from prison via Zoom, is being held on $1.25 million bail.

During each of today’s hearing, the judge addressed each of the ex-officer’s lawyers in turn while also addressing Assistant Attorney General Matthew Frank, saying, “The court is not going to be happy reading about…any discussions of the merits of the case or the guilt or innocence of any parties.”

“From this day forward everyone has had their warning if they don’t heed the court instruction it will be a gag order and possibly a change of venue,” Frank added, according to Daily Mail [3].

The location of where to hold the trials has yet to be determined, with Judge Cahill saying today that the publicity, statements and leaks from all sides are “pushing the case towards a change of venue.”

Family members of Floyd’s sat in court throughout the entire proceedings, while those related to the officers came in and out during their hearings.

In the wake of Floyd’s death on May 25, racial tensions have boiled over throughout the entirety of the United States. The one thing is for sure now is that when these trials finally do take place, all eyes in this country will be on the proceedings.