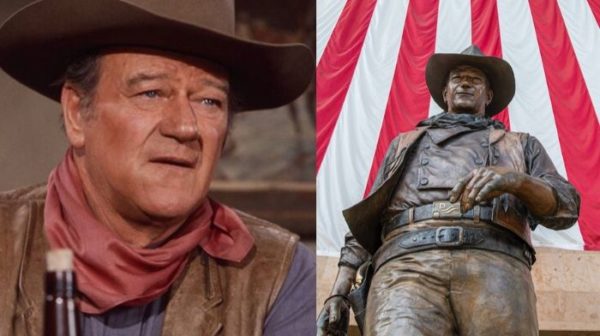 Two of the California Democrats who are leading the charge to have the John Wayne Airport in Orange County renamed are now baselessly arguing that the legendary movie star would not have defended George Floyd, who was killed in police custody in Minneapolis, Minnesota back in May.

Fred Smoller and Dr. Michael Moodian, two of the three Democrats whose names are on the resolution to rename the airport, fired back after Wayne’s son Ethan Wayne rushed to his father’s defense by claiming he was not a racist.

“It is commendable – though not surprising – that Ethan Wayne would come to the defense of his famous father,” the two Democrats told Fox News [1]. “However, there is nothing in the historical record to support Ethan’s assertion that ‘if John Wayne were here today, he would be in the forefront demanding fairness and justice for all people,’ and that, ‘He would have pulled those officers off of George Floyd, because that was the right thing to do. He would stand for everyone’s right to protest and work toward change.’”

Smoller and Moodian have taken interest in Wayne’s 1971 interview with Playboy [2], in which he said, “I believe in white supremacy until the blacks are educated to a point of responsibility. I don’t believe in giving authority and positions of leadership and judgment to irresponsible people.” Though Ethan said that this interview did not convey his dad’s “true feelings,” the Democrats aren’t buying it.

“When John Wayne had the privilege of a public forum and megaphone, he clearly expressed his belief that others were inferior and undeserving of an equal place in society. He was dismissive of historical atrocities. He ridiculed advocacy for fairness and equality,” they continued, going on to argue that Wayne “had no kind words for the societal movements of the 1960s in which blacks, women, LGBTQ+ community members, and Native Americans fought for ‘fairness and justice for all people.’”

Smoller and Moodian then went full bore bonkers when they argued that Wayne would not have condemned the death of Floyd. “He lived in a time he could have chosen to do or simply say the ‘right’ thing. He didn’t,” they said. “His words and oppressive views were just as wrong then as they are today. If he were with us today, we believe it is far more likely that he would have come to the defense of Donald Trump rather than George Floyd.”

This was in direct response to Ethan defending his father in a statement released on Monday. “Let me make one thing clear—John Wayne was not a racist. I know that term is casually tossed around these days, but I take it very seriously. I also understand how we got to this point,” Ethan said. “There is no question that the words spoken by John Wayne in an interview 50 years ago have caused pain and anger. They pained him as well, as he realized his true feelings were wrongly conveyed.”

“The truth is, as we have seen in papers from his archives, he did not support ‘white supremacy’ in any way and believed that responsible people should gain power without the use of violence,” Ethan added. “Those who knew him, knew he judged everyone as an individual and believed everyone deserved an equal opportunity. He called out bigotry when he saw it. He hired and worked with people of all races, creeds, and sexual orientations. John Wayne stood for the very best for all of us—a society that doesn’t discriminate against anyone seeking the American dream.”

The 58-year-old later went on to say that he knows exactly what his father would have done had he been there when Floyd was being arrested. “One thing we know – if John Wayne were here today, he would be in the forefront demanding fairness and justice for all people,” Ethan said. “He would have pulled those officers off of George Floyd, because that was the right thing to do. He would stand for everyone’s right to protest and work toward change.”

“Since his death more than 40 years ago, his legacy continues through the John Wayne Cancer Foundation, which has helped provide courage, strength and grit to the fight against cancer, and through his extensive film library,” Ethan concluded. “My father believed that we can learn from yesterday, but not by erasing the past. His name, no matter where it is, will always embody these values, and our family knows the positive impact that he made on the world will never be diminished.”

This comes as Democrats are trying to remove statues and tributes to historical people who they have deemed to be “offensive,” toppling and displacing fixtures all over the country. Their radical actions against historical figures that we all hold dear have left many of us wondering where their madness will actually end.