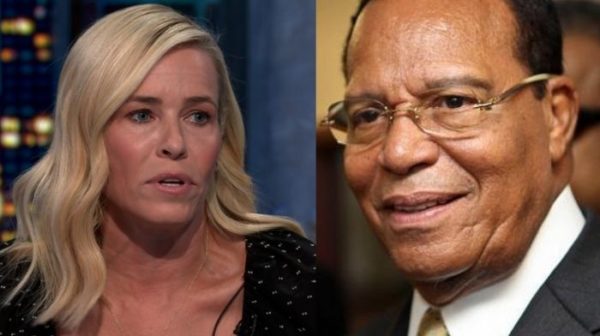 The radically leftwing comedian Chelsea Handler has once again shown the world how hopelessly ignorant she really is by praising the “powerful” rhetoric of Louis Farrakhan, a known anti-Semite.

“I learned a lot from watching this powerful video,” she captioned a video of Farrakhan that she posted to her Instagram on Sunday. The video in question is from a 1990 appearance that Farrakhan made on “The Phil Donahue Show,” and what he had to say on it is nothing short of disturbing.

The video opens with a white woman asking why “white people, black people, Jewish people” can’t “come together.” Farrakhan replied by saying that while “the desire is good,” the reality is the “total opposite.” He went on to tell the woman that she and her fellow white people view blacks as “second-class or inferior citizens” and enforce “black inferiority” by stripping them of African culture.

I learned a lot from watching this powerful video. [1]

It’s not clear what exactly Handler learned from this video; some of her followers called her out in the comments section. “So, based on this logic, if you find a video of Hitler saying something positive and powerful, will you feel equally compelled to share it?” one person commented. “You gave hate credibility and a large platform today.”

Instead of backing down, however, Handler stood by the hateful video. “No, because Hitler was responsible for killing millions of lives. Farrakhan is just responsible for his own promotion of anti-Semitic beliefs. They are very different,” Handler wrote. “Another thing: perhaps Farrakhan’s anti-Semitic views took form during his own oppression. We know now that oppression of one race leads to an oppression of all races.”

It should be noted that Handler herself is Jewish, which makes it even more ridiculous that she would promote an anti-Semite’s rhetoric via her social media account.