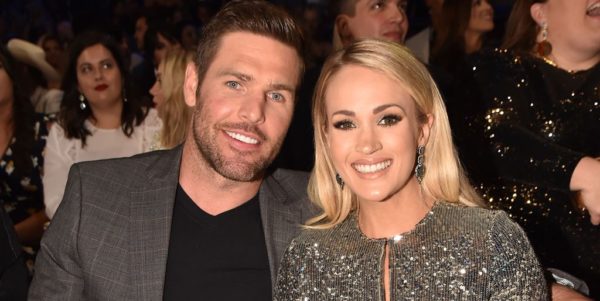 Country music star Carrie Underwood and her husband, former pro-hockey player Mike Fisher, are known for having a strong marriage. In the latest episode of their faith-based documentary, “Mike and Carrie: God & Country [1],” the couple opened up about how they keep their marriage going by compromising.

Now that Fisher is retired from hockey, he often does  funny videos for his outdoor company Catchin’ Deers, which makes his wife laugh.

“He thinks he can sing now,” Underwood explained [2] in the new episode. “He says things like, ‘My new song drops Friday.’ And I’m like, ‘Don’t say ‘drops.'”

“I’m gonna be in the studio,” she added, mimicking their conversations. “No, you’re not. I mean, yes, technically, but no.”

The couple went on to talk about the contrast between Fisher being an avid outdoorsman and Underwood being an animal rights activist.

“Carrie does not like hunting one bit,” Fisher said, with Underwood adding, “If he could be a vegan/vegetarian, my life would be almost perfect.”

The final episode of Mike and Carrie: God & Country premieres tomorrow! Link in bio to catch up on Episodes 1-3! [3]

They went on to say that it’s their shared Christian faith that helps them bridge the gaps when it comes to their differences.

“We know God brought us together and [we] trust his judgment,” Underwood said. Fisher agreed, saying, “One of the compromises is that I wouldn’t have beef, and that I’d shoot all my meat, with few exceptions.”

This helped Underwood realize the value of the time her husband spends outside.

“I don’t know what goes on there. I don’t ask!” Underwood added with a laugh. “But he definitely comes home and … you can tell he feels fulfilled.”

In a previous episode of the internet show, Underwood opened up about the many miscarriages she suffered before she gave birth to her second child.

“I had an honest conversation with God, and I told Him how I felt. I was hurt. I was a little angry and, of course, you feel guilty for being mad at your creator,” the Grammy-winner confessed. “And I told him we needed something. We needed to have a baby or not, ever, because I couldn’t keep going down that road anymore.”

This piece originally appeared in UpliftingToday.com [5] and is used by permission.