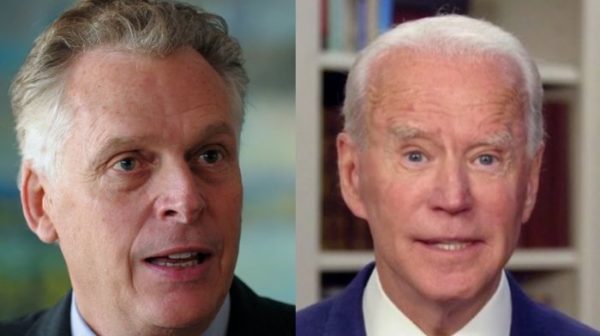 Terry McAuliffe, a top campaign surrogate for Joe Biden, just slipped up when he was recorded admitting that the presumptive 2020 Democratic presidential nominee’s campaign prefers he stay “in the basement.”

In a video obtained by Fox News [1], McAuliffe can be seen admitting this to a group of Democrats from Virginia. “People say all the time, ‘Oh, we got to get the vice president out of the basement,'” McAuliffe told the Norfolk City Democratic Committee during a Zoom meeting on June 6. “He’s fine in the basement. Two people see him a day: his two body people. That’s it. Let Trump keep doing what Trump’s doing.”

“It’s hard for the vice president to break through,” he added. “You’ve got the COVID crisis. He’s not a governor, doesn’t have the National Guard. He’s not the president, doesn’t have the briefing room. He needs to come out strategically. And when he says something like he did on race relations two days ago, it needs to have a big impact — thoughtful, and that’s what we’re preferring that he actually do at the time.”

“He’s doing a lot of local. He’s talking to two, three governors a day. He’s doing roundtables, Zoom calls,” added McAuliffe, who served as campaign chairman for Hillary Clinton in 2016. “A lot of it’s being done in those six battleground states that we have going forward.”

Everyone has noticed that Biden has been making limited campaign appearances, even from his basement, since the start of the COVID-19 pandemic. Even with these limited appearances, Biden has still made a series of humiliating gaffes that his campaign has struggled to recover from.

Unfortunately, it appears that Biden’s strategy of “staying in the basement” is actually paying off for him, as recent polling [2] has stated that he has taken the lead over Donald Trump. This is undoubtedly why McAuliffe and his team have no problem keeping Biden in the basement as long as possible. Meanwhile, Trump has already launched plans to start doing his famously boisterous campaign rallies, and he’s called on Biden to do the same. “I’d love to see him get out of the basement so he can speak,” Trump said last month.