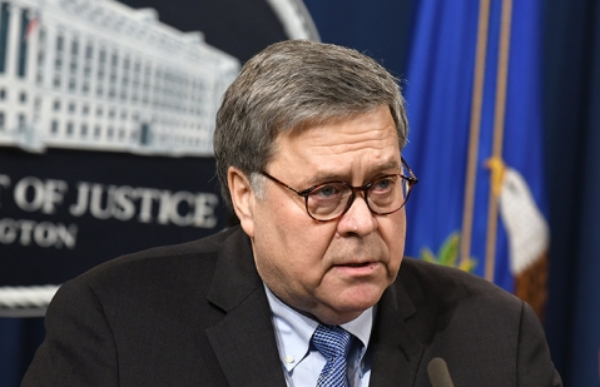 In an interview with Fox News that aired on Tuesday, U.S. Attorney General Bill Barr hinted that very big Democrat names, though not the biggest, could be mentioned in the probe by Connecticut U.S. Attorney John Durham focusing on 2016 Obama regime actions relating to the Trump campaign. Barr said that the DOJ was “looking at” figures who were familiar to the public, though not at the level of Joe Biden or Barack Obama.

The AG told Fox, “I think before the election, I think we’re concerned about the motive force behind the very aggressive investigation that was launched into the Trump campaign without, you know, with a very thin, slender reed as a basis for it. It seemed that the bureau was sort of spring-loaded at the end of July to drive in there and investigate a campaign… We can’t discuss future charges. But I have to say that I do find it a little irritating. You know, the propensity in the American public on all sides of the political spectrum when they see something they think could be a criminal violation, I say, why hasn’t this person been indicted again? And, you know, there’s the old saying that the wheels of justice grind slow and they do run slow because we have due process and we follow the process. But people should not draw from the fact that no action has been taken yet, that that means that people are going to get away with wrongdoing.”

Many Americans have shown impatience with various DOJ probes that seem to go slow and bear no fruit. But this, says Barr, may be different: “For the first time in American history, police organizations and the national security organizations were used to spy on a campaign, and there was no basis for it. The media largely drove that — and all kinds of sensational claims were being made about the president that could have affected the election. And then later on, in his administration, there were actions taken that really appear to be efforts to sabotage his campaign. And that has to be looked at. And if people want to say that I’m political because I am looking at those potential abuses of power, so be it. But that’s the job of the attorney general.”

Barr has a point, as an effort by a lame duck president to investigate the nominee of the opposing party is unheard of even in the dirtiest annals of American political history. But such was the Left’s (and the Obama regime’s) well-founded fear of a Trump victory that all law and ethics were thrown out the window in their operation to stop Trump’s ascension to the White House. As in so much else, they failed at that as well.

Barr also spoke of the Flynn case and how prosecutors handled it: “They seem to have ignored all the exculpatory evidence that was building up and continued pell-mell to push it forward. So that’s one area of concern. The other area of concern is that after the election, even though they were closing down some of that, as we’ve seen in the Flynn case, and say there’s nothing here, for some reason, they went right back at it, even at a time where the evidentiary support or claim support, like the dossier, was falling apart. And it’s very hard to understand why they continued to push and even make public testimony that they had an investigation going when it was becoming painfully obvious or should have been obvious to anyone that there was nothing there.”

The smart money in DC says the Durham probe will come to a head in late summer, just enough time to give it traction and make it an issue in the fall election. If that happens, the advantage in November will further shift to Trump and the GOP.