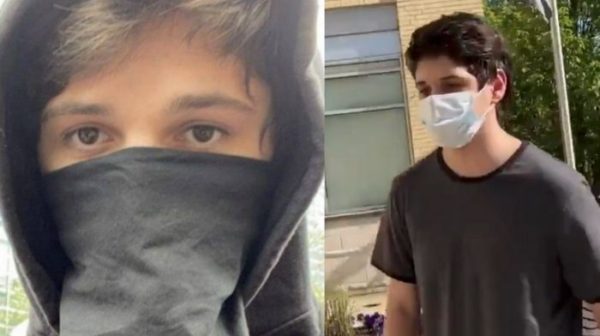 Brian Bartels, the 20-year-old man who has been blamed by police for inciting a violent riot in Pittsburgh, Pennsylvania on Saturday, turned himself in to law enforcement on Monday with his mom and dad escorting him into the station as if he were a child. Someone isn’t such a tough guy now!

The Antifa kid who police say incited riot in Pittsburgh has been arrested and watching him turn himself in with mommy and daddy is the absolute greatest thing on the internet today.pic.twitter.com/pTZUPV9XZL [1]

Police had launched an investigation into who had spray-painted a police vehicle and then set it on fire over the weekend during demonstrations protesting the death of George Floyd, who had died in police custody in Minneapolis, Minnesota days before. Police zeroed in on Bartels after receiving an anonymous tip, and they quickly obtained a search warrant and executed it at his home. There, they found two guns, six spray-paint cans, gloves, and the sweatshirt that the suspect had been wearing during the riots, according to the Pittsburgh Post-Gazette [3].

Disturbing video footage showed a man believed to be Bartels dressed in all-black Antifa gear smashing the windows of the police SUV and spray-painting it. When a woman tried to stop Bartels, he flipped her off and continued on with what he was doing. (Warning: graphic imagery and obscene language in the following Twitter video.)

#BREAKING [4] NEWS: Pittsburgh Police say 20 year old Brian Bartels is the man who incited riots in downtown #Pittsburgh [5] yesterday. This is video taken of him destroying a police cruiser. An arrest warrant has been issued. https://t.co/AFYsrV2vsD [6]

Bartels is now facing charges that include institutional vandalism, rioting, and reckless endangerment of another person, according to police [9]. Pittsburgh Police Chief Scott Schubert spoke out to call it a “damn shame” [10] that Antifa rioters like Bartels have effectively hijacked the Floyd protests for their own gain.

“I am so angry at the fact that some segment hijacked this and then took some of the youth and brought them into the mix,” Schubert lamented. “There’s no doubt that that’s who’s doing it and a lot of things we’re seeing are white males, dressed in the anarchist, ANTIFA, they’re ones who are fueling a lot of this. It’s just a damn shame that they took advantage of the situation, for something, something happened in another state where somebody died who shouldn’t have died, and they hijacked that message for their own.”