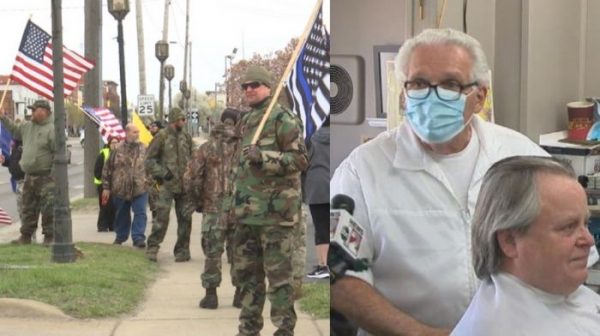 “We are here to make sure he doesn’t get arrested,” Daniel Brewer told WEYI-TV [1]. “We’re willing to stand in front of that door and block the entrance so the police will have no entry there today.”

The barbershop has been open since last Monday, and it was absolutely packed with customers on the first morning after the reopening. On Saturday, dozens of supporters gathered outside the barbershop while fifteen waited in line inside to get haircuts.

Manke told reporters that he followed Whitmer’s order as long as he could, but he was eventually left with no choice but to reopen when he was denied unemployment twice and had no money coming in while Whitmer kept extending the order.

“I’m not trying to be a scofflaw. I’m trying to make a living,” he said. “I tried for the unemployment. I was denied twice on unemployment. I haven’t seen anything in one of these other checks from the government.”

As he cut a customer’s hair, Manke added that Whitmer “is not my mother” and “I just made an adult decision that I was gonna open up.”

On Friday night, Michigan officials hit Manke with a health protection order from state Attorney General Dana Nessel’s office demanding he close his barbershop immediately. The order cited the fact that Manke has been taking customers from other areas like Ann Arbor, Saginaw, Detroit, Jackson, and more, creating a higher risk of spreading coronavirus.

Mr. Manke was given every opportunity to voluntarily comply with the Governor’s Executive Order and the order of the Michigan Department of Health & Human Services Director. As a result of his continued operation, today his business was deemed an imminent danger to the public health and ordered to be shut down by the DHHS Director. If he refuses, the Department of Attorney General will request an order from the Shiawassee County Circuit Court on Monday to close his business. Mr. Manke’s actions are not a display of harmless civil disobedience. His actions are counterproductive to the collective effort businesses and communities everywhere have made to slow the spread of COVID-19, and by opening the doors to his business, he’s putting the lives of many more Michiganders at risk.

Robert Gordon, director of the Michigan Department of Health and Human Services, added that “people continue to die in our state every day due to the coronavirus. It is critically important for businesses and the general public to follow the executive order to reduce further spread of COVID-19 and save lives.”

Whitmer has been in hot water for weeks with the people of Michigan because of the strict restrictions she has put in place amidst coronavirus. When asked directly about Manke, she claimed that she was just trying to save his life and those of his customers.