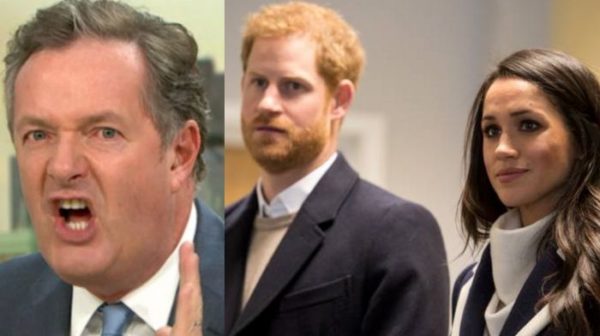 Morgan told The Sun [2] ‘s TV Mag that the coronavirus pandemic had put Meghan and Harry “firmly back in their box” and shown the world that healthcare workers are the real people who should be valued, rather than celebrities.

“I don’t miss the celebrity stuff at all – celebrities have been put firmly back in their box. The real stars are the health workers. They’re the people that we need to value highest,” Morgan said. He went on to single out Meghan and Harry specifically after the couple stepped down from the royal family and moved to Los Angeles, California, saying that the current situation has rendered them “utterly irrelevant”.

“I don’t really care about them anymore,” Morgan said. They seem so utterly irrelevant, stuck in their rented Hollywood mansion, desperately trying to get attention. Doing stupid lawsuits and whining about the media. No one cares.”

Meghan and Harry are currently living in the $18 million mansion of Hollywood tycoon Tyler Perry with their one year-old son Archie while they look for a home of their own in the area.

This comes weeks after Morgan admitted that he may have taken his attacks on Meghan and Harry “too far.”

“Have I taken things a bit too far? Probably,” he said, according to the U.K. Standard. “Do I think that will govern and temper how I talk about them going forward? Absolutely.”

Morgan went on to say that his “best as a journalist on stuff that really matters”.

“It’s the stuff that is substantial, particularly when people’s lives are at stake, that seems to galvanize my personality into the best possible place,” he explained. “And it’s times of relative peace, calm, quiet and dare I say boredom that might occasionally bring out the worst in me.”

“Having squabbles with people who are never going to change their mind in a million years about stuff that no longer seems remotely important,” Morgan continued.

The “Good Morning Britain” host has long been a vocal critic of Meghan’s in particular ever since her marriage to Harry. It remains to be seen whether Morgan actually will ease back on her a bit going forward.