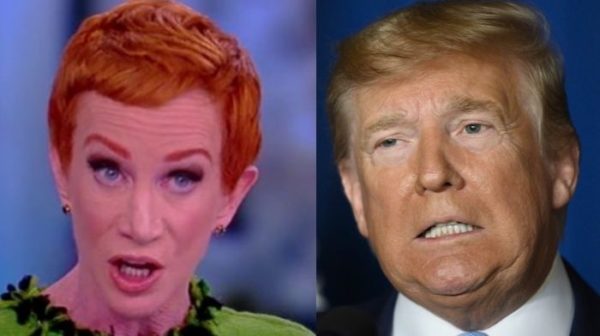 Comedian Kathy Griffin, who infamously once posed with an effigy of a severed head of Donald Trump [1] during a disturbing photoshoot, has seemingly called for the president’s death once again, saying that he should take an empty syringe “with nothing but air.”

Griffin said this in response to a tweet from CNN reporter Jim Acosta, who had written about President Trump openly considering being given an insulin regimen during a White House diabetes event on Tuesday, according to The Washington Examiner [2].

“Syringe with nothing but air inside it would do the trick. F— TRUMP,” Griffin tweeted in response.

Syringe with nothing but air inside it would do the trick.

When directly injecting air into the bloodstream via a syringe or an IV, it can lead to an air embolism, which often proves to be fatal. The Washington Examiner tweeted this out in response to Griffin, causing her to become unhinged once again when she was called out for wishing death upon the president.

“I SURE DID, F***ER,” Griffin tweeted as a reply. She ended this tweet with the hashtag “#TrumpLiedPeopleDied,” something the Left has been using to blame Trump for coronavirus deaths even though the disease originated in China and has killed hundreds of thousands of people all over the globe.

Griffin’s unhealthy hatred for Trump was first shown to the world back in 2017, when she posed with a bloody prop symbolizing Trump’s severed head. Backlash against Griffin was swift. She even received a visit from U.S. Secret Service agents, according to her lawyers.

“I don’t think I will have a career after this,” Griffin told reporters in an uncomfortable press conference once the photo came out. “I’m going to be honest. He broke me.”

Though Griffin was apologetic at first, she quickly changed her tune and has since rebranded herself as a Trump-hating warrior who has no regrets about what she did and will say anything to make the president look bad. These days, Griffin functions as a chilling reminder of the sheer amount of hatred leftists have in their hearts for people who think differently than they do.