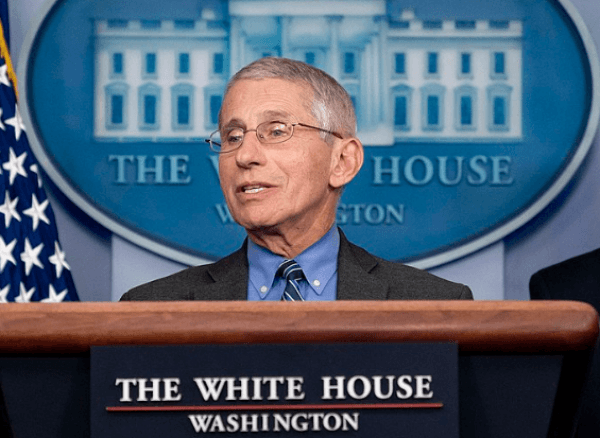 Changing his tone and his tune, Dr. Anthony Fauci said Friday on CNBC that stay-home orders that extend too long could cause the country “irreparable damage.” That view falls in line with the president on this issue.

Fauci told the interviewer, “I don’t want people to think that any of us feel that staying locked down for a prolonged period of time is the way to go. But now is the time, depending upon where you are and what your situation is, to begin to seriously look at reopening the economy, reopening the country to try to get back to some degree of normal.”

Fauci told CNBC that staying closed for too long could cause "irreparable damage." He said the US had to institute severe measures because #Covid19 [1] cases were exploding “But now is the time, depending upon where you are and what your situation is" to open. https://t.co/TXYalIWvHM [2]

He also cautioned, hedging his bets, against reckless reopening and advocated the use of “very significant precautions” as regulations are lifted: “In general, I think most of the country is doing it in a prudent way. There are obviously some situations where people might be jumping over that. I just say, ‘Please, proceed with caution if you’re going to do that.’”

The doctor’s words came after two top congressional Republicans on Thursday, Senator Rand Paul of Kentucky and Rep. Andy Biggs of Arizona, wrote in an op-ed in USA Today that Fauci’s recommended precautions at the start of the virus had “emasculated” the nation’s health care system and “ruined” the economy.

“Fauci and company have relied on models that were later found to be deficient. He even has suggested that he can’t rely on any of the models, especially if the underlying assumptions are wrong. Yet, Fauci persists in advocating policies that have emasculated the medical care system and ruined the economy.”

Paul and Biggs also recalled Fauci’s testimony before a Senate committee that opening too soon would “result in needless suffering and death.” They hit him on the seeming contradiction of the two statements, “What about the countless stories of needless suffering and death produced by Fauci’s one-size-fits-all approach to public health?” Both men said the common sense of the American people is a better gage on reopening than oft-wrong government models.

Earlier Friday, Fauci said it was possible that the U.S. could produce and begin to distribute a virus vaccine by December: “Back in January of this year when we started the phase 1 trial, I said it would likely be between a year and 18 months before we would have a vaccine. I think that schedule is still intact. I think it is conceivable. If we don’t run into things that are, as they say, unanticipated setbacks, that we could have a vaccine that we could be beginning to deploy at the end of this calendar year, December 2020, or into January, 2021.”

Fauci is feeling the political pressure as Americans —from the president to the average person— have grown tired of nanny state virus regulations and medical analysis that errs on the side of caution to an extent that perhaps was not needed and that has thrown millions out of work. It is likely that going forward, the consensus both politically and economically will be to do what should have been done in the first place: Focus on those who are vulnerable to the virus and let the rest of America get on with their lives.