Robbins is attacking millions of Americans simply because they don't share his political views.

Hollywood star Tim Robbins launched a truly vile attack on the United States as he went after the American people and the nation as a whole.

Robbins of “The Shawshank Redemption” fame unraveled over the news that states across America, including three run by Democrat governors, are going to gradually start reopening this week after weeks of lockdown due to the coronavirus pandemic.

“My heart hurts. This is an outrage. But hey, reopen the economy because I need poor people to cut my hair, cut my nails, watch my kids and make my lattes,” Robbins wrote in a tweet that has since been deleted, according to Breitbart News. “We have become a death cult run by sociopaths [and] fueled by racist self-interested citizens with no sense of shared responsibility.” 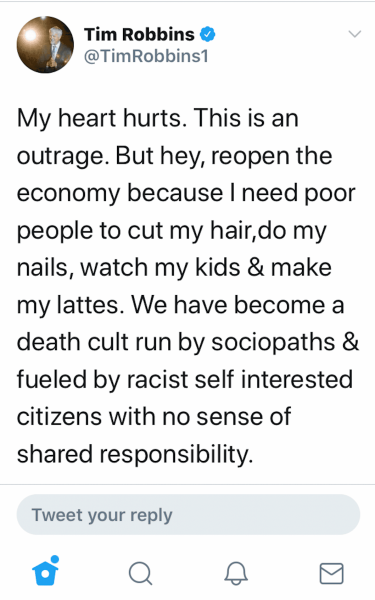 It should be noted that Robbins is a proud Democrat with a net-worth of $60 million, so it comes as no surprise that he’s in no rush to see our country open up again. As a wealthy elitist, he seems to be in the camp of hoping the country stays shut down as long as possible so that President Donald Trump’s chances of reelection could be destroyed.

Trump has been an outspoken supporter of the country reopening as soon as possible, which is also undauntedly why Robbins is so against this happening. He has a terrible case of Trump Derangement Syndrome that has seen him call the president a “child abuser” and a “petulant, overgrown child monster.”

Last October, he desperately urged his fellow Democrats to unite behind Senator Bernie Sanders (I-VT) for this year’s Democratic presidential nomination. “I don’t understand it. I just want to say that if you want to talk about unity and stopping this movement toward fascism, you can’t be attacking people that could change things,” Robbins said at the time. Yet here Robbins is, attacking millions of Americans simply because they don’t share his political views.