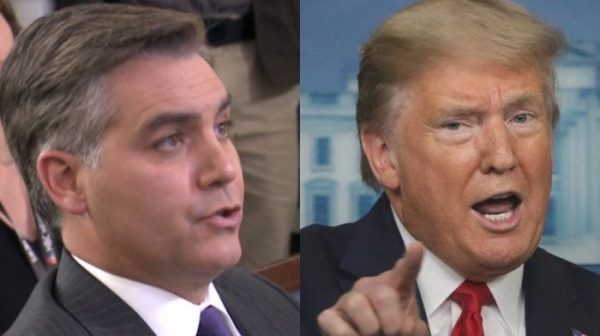 President Trump fired Flynn just after he took office for admitting to lying to Vice President Mike Pence and the FBI about discussions with Russian officials on sanctions, according to The Blaze [1]. This week, new information has come to light showing that the FBI agents who met with Flynn had done so with the intention of getting him to lie.

.@CNN [2] doesn’t want to speak about their persecution of General Michael Flynn & why they got the story so wrong. They, along with others, should pay a big price for what they have purposely done to this man & his family. They won’t even cover the big breaking news about this scam!

Back in December of 2017 [4], Trump tweeted that he “had to fire General Flynn because he lied to the Vice President and the FBI. He has pled guilty to those lies. It is a shame because his actions during the transition were lawful. There was nothing to hide!”

When Acosta asked Trump today if he stood by this tweet, the president went off and held nothing back. He began by saying the the “dirty cops” at the FBI “tormented Gen. Flynn.”

“You see the notes, Jim,” Trump said. “What they did to Gen. Flynn…was a disaster and a disgrace, and it should never be allowed to happen in this country, again.”

He then shifted his focus to blasting CNN, a network that was all too happy to report on the Flynn situation at the time. “CNN tormented him, in all fairness,” Trump said. “I hope to see that CNN will — not even apologize, which they should, but just cover it fairly — because he is in the process of being exonerated. If you look at those notes from yesterday, that was total exoneration. These were dirty, filthy cops at the top of the FBI.”

“They were dishonest people,” the president added of the FBI agents. “Now we have to see what’s going to happen. Gen. Flynn was treated like nobody…should be treated.”

There’s no denying that the president is right that what happened to Flynn is shameful, and he is owed an apology by both the FBI and CNN for what happened to him. If we know anything about fake-news CNN, however, we know that General Flynn unfortunately should not be expecting an apology from them anytime soon.