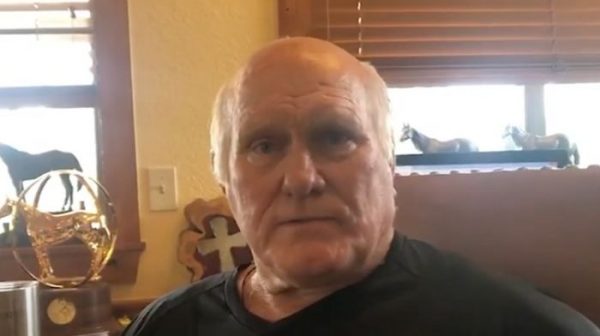 Legendary NFL quarterback and current sportscaster Terry Bradshaw spoke out this week to offer a message of hope to his fellow Americans as we continue to battle the coronavirus pandemic.

Bradshaw began by reciting a quote by Grammy-winning gospel singer Wintley Phipps, who is also a minister.

“It is in the quiet crucible of your personal private sufferings that your noblest dreams are born, and God’s greatest gifts are given in compensation for what you’ve been through,” Bradshaw recited.

Bradshaw doubled down on this message while appearing on Fox Nation’s “Bible Study: Messages of Hope.” [1]

“As a believer in this nation, in its leadership and in its people, we will get through this,” he said. “When we’re through this, we’re going to have learned a great lesson in life and we’re going to learn how great people are. And we need to get our faith back. We need to get our faith back in human beings. And we can do that. All of us together.”

“So hang in there,” Bradshaw added. “Stay prayerful, stay caring. And please do the right things to get this pandemic passed so we can move on with life as we once knew it.”

This comes after Bradshaw released his hilarious new song “Quarantine Crazy,” a humorous take on life in COVID-19 quarantine. In the song, the NFL legend sings that he’s feeling “‘Achy Breaky‘ like Billy Ray Cyrus, ’cause if I leave I might get that virus.”

Bradshaw explained that he came up with the song from an interaction with his wife Terri.

“I was on the phone … talking football,” Bradshaw told Rolling Stone [2], “And Tammy’s in the kitchen, and she hollers at me and says, ‘Terry! I’m going quarantine crazy!’ I said, ‘Quarantine crazy? Hey, that’s a country song title.'”

He went on to explain that the song is told from the perspective of a man who is not used to spending so much time with his family.

“He’s the guy that’s never taken time to spend with his family; always got an excuse,” he said. “It’s either, ‘Honey, football season. Got to work late. Golf on Saturday to get the stress off of the week’s work.’ He’s always got all these excuses. But now he’s quarantined and he has to spend time with them.”

Bradshaw concluded with another message of hope for Americans everywhere.

“We’re going to get through this,” Bradshaw said. “And we’re going to learn from it. And this country was built on tough people who don’t take no for an answer; who persevere and have a positive outlook.”