Hollywood would rather see America fail than see Trump succeed.

The liberal world of Hollywood was completely “triggered” this week by President Donald Trump’s formation of the Council to Reopen America, which aims to jumpstart the American economy. While this is something that we should all be excited about, Hollywood leftists acted like it was the absolute worst thing in the world and resorted to bullying the members of the council.

“WHERE ARE THE PUBLIC HEALTH EXPERTS? Where are the doctors? Where are the scientists? WHERE?!” tweeted self-proclaimed political expert Alyssa Milano, who seems to think her acting credits on shows like “Who’s the Boss?” and “Charmed” make her a political genius.

“They council has zero credibility at this point,” tweeted actress Rosanna Arquette of “Diary of a Sex Addict” fame.

They council has zero credibility at this point.

It should be noted that President Trump has said that the council is still being formed, and that it will include doctors, business leaders, and administration officials. Contrary to what these liberal nitwits are saying, Trump confirmed on Monday that White House advisers Jared Kushner and Ivanka Trump would not be on the council, according to Breitbart News.

Not letting these facts stop her meltdown, director Ava Duvernay tweeted and then deleted an image showing an image of the council that included Kushner and Ivanka. “An overwhelming majority of the American public — 87% — is now making the effort to stay at home when possible, a new YouGov survey finds, with most saying they’ll continue regardless of any official limitations,” she wrote. “In other words, we don’t trust Trump and these criminals.” 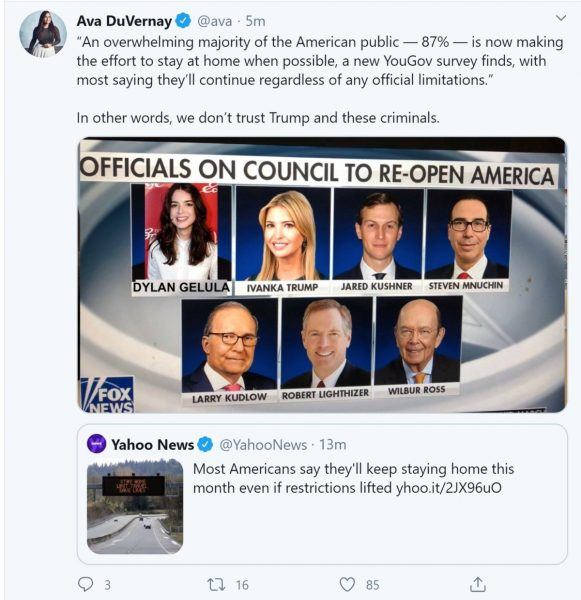 Actress Kristen Johnson also tweeted out the false photo, calling it the “supervillain Task Force,” while British actor Alex Winter tweeted and deleted a tweet describing the council as “The Death Squad.”

“My God- these ⬇️ are the people to decide on when the country should re-open. Not one doctor,” actress Mia Farrow tweeted alongside the image that didn’t show the real council members.

My God- these ⬇️ are the people to decide on when the country should re-open. Not one doctor https://t.co/sejFFldsP3

“May have taken over a decade but we finally got our death panel,” wrote comedian Travon Free, who writes for the late night talk show of Samantha Bee.

May have taken over a decade but we finally got our death panel. pic.twitter.com/Zixmx7KbnK

This proves once and for all that the leftists of Hollywood would rather see America fail than see Trump succeed. We should all be actively rooting for the president right now to do whatever it takes to get our economy up and running again, yet the wealthy elites of Hollywood have no problem watching our country be financially destroyed if it means Trump may lose in November.

Hollywood liberals have shown once again that they not only have no respect for our president, they have no love for our country. Shame on them all.