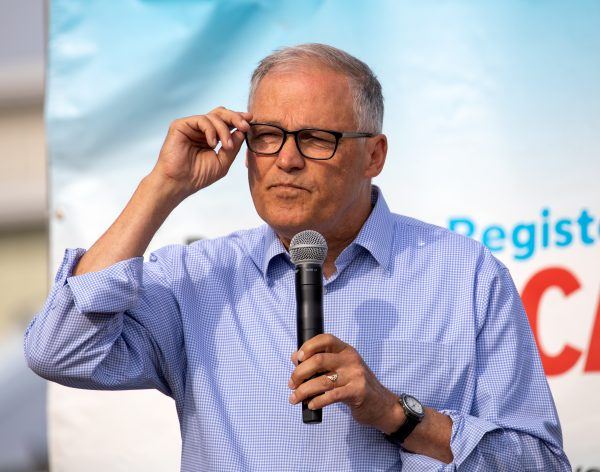 Given the response to the coronavirus is being executed at the state level, it is important these days, as always, to have competent people sitting in governor’s mansions. The five state underperforming executives mentioned here have done well and not well in regards to virus response. Though they all have other issues facing their states that far predate the virus.

5. Jay Inslee (D-WA)- Obsessed with climate change and green policy, he ran for president while his state became crowded with homeless people who could spread the virus. His virus response could have been worse, but that is becoming the least of his worries.

Inslee badly lost his presidential bid, in fact the effort was politically embarrassing. You’d think after that he’d attend to state business. But no, the state continues to enact silly leftist measures while poverty grows and the homeless crowd the streets of Seattle.

4. Andrew Cuomo (D-NY)- While also turning the corner on the virus, he’s a second generation Hamlet-on-the-Hudson, one minute working well with and praising the president, another minute making up charges and taking cheap political shots.

NYC is becoming unlivable under its hard left mayor and the governor has done nothing. He is likely running for president in 2024.

3. Gavin Newsom (D-CA)- Not doing badly with virus response and working well with the White House, Newsom may be setting himself up for a 2024 run for the Oval Office. But other issues like state economics cloud his future.

California has become a state where the rich rule, the middle class diminishes, and those in poverty rise in number. It’s a Third World scenario. Its Democrat state legislature makes Washington state look like Thatcher’s Britain and public sanitation and homeless issues in its largest cities are ignored and worse.

2. Gretchen Whitmer (D-MI)- She is almost the worst we have. Auditioning for the Biden veep slot, she puts politics over virus response. Detroit is a multigenerational shambles and the state is likely to vote for Trump again in 2020. Though sometimes telegenic, she is, as Eleanor Roosevelt said of John Kennedy, “All profile and no courage.” She is a useless amateur and a failed executive.

1.  J.B. Pritzker (D-IL)- A fiasco on all fronts. Lies about his state virus data, complains to the federal virus response effort when they are working around the clock for him, and is otherwise serially incompetent as a governor. Chicago has higher murder rate numbers than war zones have KIA. This Marriott hotel heir bought the office and now finds himself way over his head. The people of Illinois suffer for it.