Falwell: Religious freedom does not disappear in a pandemic

Years from now, people of faith will continue to be grateful that President Trump and Attorney General Barr stood up for our religious liberties at this perilous time.

United States Attorney General William Barr made this clear when he publicized a Statement of Interest expressing the federal government’s firm opposition to “special restrictions on religious activity that do not also apply to similar nonreligious activity,” declaring, “[E]ven in times of emergency, when reasonable and temporary restrictions are placed on rights, the First Amendment and federal statutory law prohibit discrimination against religious institutions and religious believers.”

Somebody needed to say it. The vast majority of Christian clergy and other religious leaders around the country fully appreciate the gravity of the situation. Pastors, rabbis, imams, and priests have all made tremendous sacrifices to ensure the safety of their congregations and the communities in which they live. Houses of worship have innovated and employed technology to keep their congregations in contact despite the need for social distancing.

At the same time, in-person services have been dramatically curtailed and many parishioners have forgone even receiving Holy Communion in a concession to public health.

Our participation in the national battle to contain this deadly virus, however, should not be seen as a compromise of our natural rights to practice our religion, as enshrined in the U.S. Constitution. In their zeal to protect their citizens, some politicians and government officials have clearly overstepped their authority and begun to jeopardize those rights. Religious leaders are right to push back, and the Justice Department is right to acknowledge the validity of their concerns.

Easter is the most holy holiday in the Christian faith—a fact unchanged in that this year’s celebration of Christ’s resurrection occurred at the very peak of the coronavirus pandemic. Some congregations, while preserving social distancing requirements, chose to keep the celebration alive by holding “drive-in” Easter services in which families remained in their cars, but could still mark the greatest of all miracles surrounded by the rest of their religious community.

Unfortunately, some public officials chose to respond in a shameful manner. Kentucky’s Democratic Governor Andy Beshear, for instance, threatened Christians in the lead-up to Easter, telling them that if they ventured out of their homes, their license plates would be recorded and their families would be issued quarantine orders that would prevent them from even shopping for groceries for two weeks thereafter. In at least one case, where some parishioners remained in their cars and others tried to keep six-foot social distancing precautions inside a church building, police followed through on this threat. To discourage attendance, someone even piled up nails in a Maryville, Kentucky church parking lot.

In the most egregious cases, however —such as in Louisville, Kentucky and Greenville, Mississippi— officials attempted to criminalize even strictly-drive-in religious services. In Mississippi, police actually punished people who attended drive-in services, issuing drivers and passengers with $500 fines each. This is a bridge too far, and a very reasonable point for Christians to push back—and push back we have.

In both cases, local churches sued to affirm their right to hold socially-distanced in-car services. No one is disputing the state government’s broad emergency power to restrict in-person gatherings, but it’s a blatant violation of the Constitution (and most states’ laws) to restrict drive-in religious services while allowing drive-through fast food and dozens of other similar exceptions.

The law is on our side. The U.S. Supreme Court has ruled that any uses of state power that serve to restrict religious practices must be neutral and generally applicable in order to avoid running afoul of the First Amendment. Clearly, if fast-food orders are being prioritized over Easter services, Christians are not being dealt with in a neutral manner.

Furthermore, the federal government and most states —including Kentucky and Mississippi— have passed Religious Freedom Restoration Acts that require the application of the “strict scrutiny” standard in all cases. Under strict scrutiny, governments must show a compelling state interest and choose means to further that interest that employ the “least restrictive means” possible.

The good news is that Christians are already winning. In Kentucky, a federal judge issued a temporary restraining order that allowed drive-in Easter services. In Mississippi, Greenville’s mayor has reversed himself, allowing drive-in worship services—but only after Attorney General Barr weighed in.

The Trump administration’s Statement of Interest filed in the Greenville case provided powerful affirmation of what we already knew: even in a pandemic, the Constitution and laws of the United States guarantee the free exercise of religion. Years from now, people of faith will continue to be grateful that President Trump and Attorney General Barr stood up for our religious liberties at this perilous time. 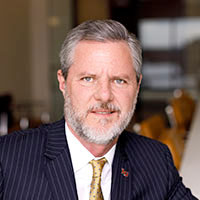 Jerry Falwell, Jr. is the President of Liberty University and co-founder of the Falkirk Center.

Press double standard between Trump and Biden is obvious, but hurting Biden