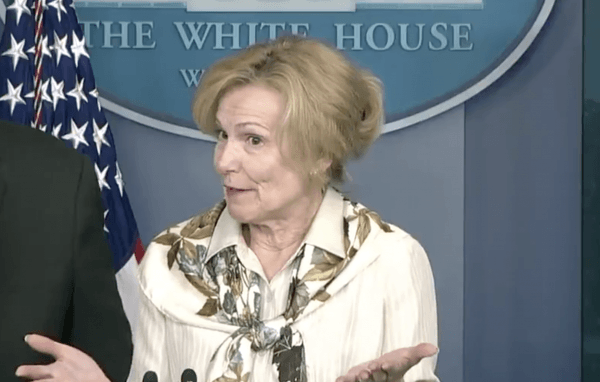 How can you not love President Trump? Even those who may disagree with him, they’ve gotta admit he’s a charming and funny guy.

During his press conference today, Trump and Dr. Birx had some hilarious banter, which really showed what a down-to-earth and relatable guy the president is.

You couldn’t help but laugh when Trump playfully backs away from Dr. Birx when she admits that she had a low-grade fever over the weekend.

Dr. Birx: "I was not here over the weekend…Saturday, I had a little low-grade fever…"

Dr. Birx: "I got a test late Saturday night and I am negative. I stayed home another day just to make sure. That's how we protect each other." pic.twitter.com/zi2GT1wnDX [1]

Birx responded that it’s important for Americans to take personal responsibility and act as if they may have come into contact with someone with the virus to avoid spreading it. She then shared that she had taken such precautions over the weekend.

“Saturday, [I] had a little low-grade fever,” Birx said.

“Uh-oh,” Trump said, throwing his hands up and quickly moving away from Birx to the edge of the stage in the briefing room.

“So, actually, probably a GI thing, but, you know, I’m meticulous. I’m a physician,” Birx said. “I looked it up. … So I got a test late Saturday night, and I’m negative. I stayed home another day just to make sure. That’s how we protect one another.”

“Unless everybody’s taking their temp everyday, we can’t say he had no symptoms,” she continued. “These are the kind of things we have to do for one another. This is the personal responsibility that I’m talking about that we all have to practice.” [The Hill [3]]

This is a side of Trump that the media rarely shows.

If they did show more of this, he would have even more support of American voters.

Read more at WayneDupree.com:
Report: Pelosi and Schumer Blocked Payments to Struggling American Families Over “Wind and Solar Tax Credits” [5]
Report: Senate Dems Block Republican Efforts To Ease Economic Woes Of Americans During Coronavirus Crisis [6]
CNN Reporter “This is About as Pissed Off as I’ve Ever Seen McConnell” [7]